Villanova Theatre Performs You Can’t Take It With You 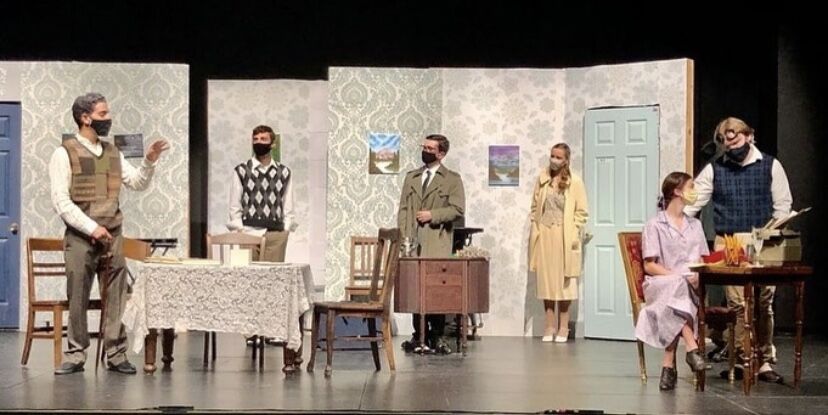 Students live streamed their production of Can’t Take It With You.

The Villanova Student Theatre and its production of “You Can’t Take It With You” by George S. Kaufman and Moss Hart was a humorous, heartfelt and inspiring play about loving the things that make life meaningful, despite unexpected circumstances.

Featuring an eccentric family with hobbies including collecting snakes, building fireworks in the basement and ballet, the show was brought to life in the Courtyard Theatre of The John and Joan Mullen Center for the Performing Arts. VST streamed the pre-recorded performance on YouTube from March 19 to March 21.

The performance was brought to fruition by the cast and crew, and the director Kylie Horan was delighted to have spearheaded the production.

“I was thrilled to hear that VST had selected this show and wanted to be a part of it in any capacity,” Horan said. “It was a wonderful experience to tease out the humor and love that just jumps out of this script, brought to life by such a malleable, hilarious cast.”

Horan is a prospective English major from Long Island, NY. Aside from directing, she is also a member of the VST board and was a scenic designer in the fall production of “Pride and Prejudice.”

As a freshman, this was Horan’s first collegiate directing role. In her note from the director, Horan conveyed the theme of the play: love.

“This is a show about love—moreover, it is a show about how love will always persevere,” Horan said. “In a time for the world so marked by stratification and isolation, remembering why we do what we do and who we do it for is integral. Now more than ever, it is integral to preserve the art, passion and laughter that make life worth living”

The process of bringing the play to the University’s stage was not easy, and COVID-19 was a looming threat to the success of the show. During the months prior to rehearsal, the cast and crew hit a myriad of unanticipated challenges including two snow days, a two-week University-wide shutdown and another two-week shutdown within the theatre due to a positive test among the production team.

“There were many challenges in getting the right feeling across without letting actors touch, scenes where there normally would be a big, romantic kiss would be,” Horan said. “Coordinating a VST show with Villanova Theatre and the Mullen Center staff is complicated as is, especially with many people eager to use the new facilities, but accomplishing this task during covid-times made it much more difficult. Lots of email chains and alcohol wipes made this production possible!”

Daniel Gorman embodied the quirky Ed Carmichael in his performance, bringing to life the free-spirited man in his role within the Vanderhof-Sycamore-Carmichael clan.

“Despite all of the hurdles and setbacks, I could not be prouder of the final product,” Gorman said. “This cast and crew is the most incredibly resilient group imaginable — and we had the best time putting together this production. It’s a show about a tight-knit, crazy, loving family, and we certainly embraced and embodied that!”

As a junior Marketing and Business Analytics student from Malvern, PA, Gorman has participated in many theatrical productions throughout his years and is an active member of VST.

For Cassandra Thomas, a junior Psychology major from Lebanon, KY, this was her first show with VST. As props manager, Thomas was tasked with gathering all the materials required to supplement the performance, including snakes, an Eleanor Roosevelt mask and other eclectic pieces.

“This show had a lot of ups and downs, but overall it was such a fun experience I wouldn’t trade it for anything,” Thomas said. “Doing live theater in the midst of a pandemic is not an easy task and without the fearless leadership of our director, Kylie, and our incredibly talented and flexible cast, we would have never pulled it off so wonderfully. I’ve met so many amazing people during this show and I’m so excited to sit back and watch what we all have worked so hard to create.”

Horan hopes the production brought joy to all who watched.

“I’m really thrilled for everyone to see this quirky, hilarious story come to life and for this resilient cast to get the praise that they deserve,” Horan said. “It’s always sad for such a special experience to end, but I am coming away from it feeling very grateful for all the lessons it has taught me, the bonds it has deepened, and excited for the next thing VST will present.”