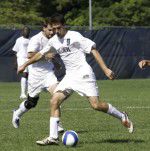 After capturing the Duke/Adidas Classic Tournament last weekend by upsetting the No. 1-ranked Duke Blue Devils and a formidable NC State team, the men’s soccer team continued its stellar play by capturing shut-out victories over cross-town rivals St. Joe’s and Drexel. The Wildcat defense again set the team’s pace, bringing its scoreless streak to four games, with Jason Friel and the rest of the Wildcats recording 3-0 and 4-0 victories, respectively.

Heading into their match against St. Joe’s, the Wildcats’ coaching staff and players focused on controlling the tempo of the game and applying offensive pressure.

“Offensively, we analyzed a lot of film, and we were able to find some holes in their defense,” junior co-captain Joe Taylor said. “We were able to take advantage by executing better with better ball movement.”

Although the Wildcats captured thrilling victories against Duke and NC State, the tempo of the games as often controlled by the opposition. During this match, the Wildcats countered the St. Joe’s attack with an offensive barrage, recording two goals in the first half and two more in the second half.

From the outset of the game, the Wildcats focused on sending long through balls past the St. Joe’s defense.

“We really wanted to try to control a majority of the possessions and continually apply offensive pressure on them,” Taylor said. The Wildcats were able to stick to their game plan, connecting for the game’s first goal on one of the numerous long balls they attempted during the first half. Senior Farris Fakhoury lofted a long through ball down the right sideline to senior forward Mike Del Guercio, who found a streaking Joe Taylor with a perfect cross feed. Taylor deposited the ball past St Joe’s goaltender Bryan Benedict to give Villanova a 1-0 lead. Two minutes later, the Wildcat attack struck again with sophomore Mike Seamon blasting a low shot past Benedict off a nice feed from senior Chris Quinn.

Heading in with a two-goal lead, the Wildcats opened up the second half with the same offensive prowess they demonstrated in the first half. By continually applying offensive pressure, the Wildcats were able to keep the St Joe’s defense on edge and limited their offense to minimal opportunities. With the game under control, the Wildcats added to their lead when Seamon and Quinn connected on back-to-back goals during the 76th and 78th minutes of the second half. The 4-0 victory marked Villanova’s longest winning streak since 2003 and largest offensive output by the Wildcats in 61 games.

As the Wildcats prepared to face an undefeated Drexel team, they continued to watch an extensive amount of film to develop a sound game plan.

“On film, we noticed that Drexel failed to apply much defensive pressure,” Taylor said. “We knew that we would be able to get a lot of opportunities if we continued to execute and pass the ball like we did against St. Joe’s.”

Showing that film never lies, the Wildcats were able to capitalize on the gaps in the Drexel defense, recording two goals in the game’s first 20 minutes. Seamon continued his strong offensive season by recording the game’s first two goals. Freshman forward Sean Mergenthal assisted on Seamon’s first goal with a quick pass to the top of the box where Seamon blasted a low shot past Drexel goalie Derrec Mongan. Seamon then extended the Villanova lead to 2-0 when he stole the ball from a Drexel defender and deposited his second goal along the inside of the right corner post. Villanova continued their offensive onslaught in the first half when Taylor gave the Wildcats a commanding 3-0 lead with his third goal of the season.

The victories over St. Joe’s and Drexel pushed the Wildcats record to 5-1-0 and gave the Wildcats great momentum as they start to prepare for a difficult Big East schedule. The Wildcats open up Big East play against Marquette and then face Big East and national powerhouse Notre Dame in a two-game home stretch this weekend.

“Our goal for the season is not to lose at home,” Taylor said. “Hopefully we can come away this week with two Big East wins.”