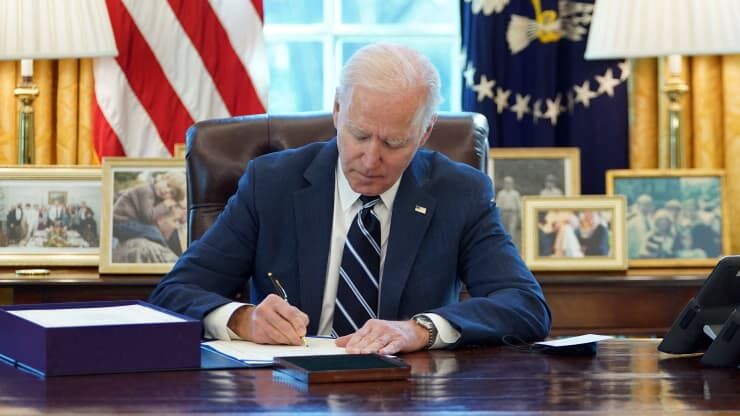 Last Friday afternoon, President Joe Biden signed into law the “American Rescue Plan Act.” This is a $1.9 trillion coronavirus relief bill that includes money for vaccine rollout, child tax credits, funding for reopening of schools and a $1,400 stimulus check. The bill is the third stimulus package passed since the beginning of the pandemic in March of last year and expands upon many of the programs that were created in the previous packages.

The bill marks the first major legislative victory of Biden’s presidency, though the final product looks different than some of the promises made during the deliberation process. Most notably is the lack of an increase in the minimum wage to $15, which progressive Senator Bernie Sanders (I-VT) attempted to add to the bill as an amendment. Senate Parliamentarian Elizabeth MacDonough, the unelected, nonpartisan interpreter of the rules of the Senate, nixed the proposal. She claimed it did not meet the requirements of “reconciliation,” the process Democrats used to ensure that their slim one-vote majority would be enough to pass the bill. Reconciliation, a rule passed in 1974, allows Congress to quickly pass budget and spending legislation with a simple majority in order to more easily react to the needs of the moment. Vice President Kamala Harris has the power to overrule the parliamentarian but chose not to do so. A White House statement said the president was “disappointed” but “respects the parliamentarian’s decision.” Senate Majority Leader Chuck Schumer (D-NY) said after the ruling, “we are not going to give up the fight to raise the minimum wage to $15 to help millions of struggling American workers and their families.”

Another key difference in the bill pertains to changes in the $1,400 stimulus checks. While campaigning for Jon Ossoff and Raphael Warnock in the Georgia run-off senate elections, Biden said “their election will put an end to the block in Washington of that $2,000 stimulus check.” Supporters of the bill later said that the $1,400 included in the latest package combined with the $600 check included in a stimulus bill signed by former President Donald Trump in December of 2020 counts as a total of $2,000. The most recent package also narrows the eligibility of those who can receive the checks. Under the new bill, only individuals earning less than $80,000 and couples earning less than $160,000 annually will be eligible to receive the stimulus. Those who can be counted as dependents, even if they are not filed as such, will not receive the checks, which means college students who are 23 years old or younger and are not paying at least half of their expenses are ineligible.

Despite the changes, proponents of the bill highlight the positive impact it will have on small businesses, as well as the unemployed and students.

“This historic legislation is about rebuilding the backbone of this country,” Biden said during the signing.

According to White House Press Secretary Jen Psaki, stimulus checks could appear in people’s bank accounts “as early as this weekend,” referring to the weekend of March 14. The President and Vice-President, as well as various cabinet officials, will embark on a campaign across multiple swing states and to promote the new legislation and underline its most important themes.

Along with an increase in vaccinations, the new financial support could prompt a return to normalcy roughly one year since COVID-19 shut down much of the American economy. According to the CDC, fully vaccinated people can now gather in small groups with other fully vaccinated individuals without masks or social distancing. A person is considered fully vaccinated two weeks after receiving the second dose of the Pfizer-BioNTech or Moderna vaccine, or two weeks after receiving the single dose of the Johnson & Johnson vaccine.

The American Rescue Plan Act passed through both chambers of Congress and was signed into law without the support of a single Republican, demonstrating the increased divide between the two parties. Ten Senate Republicans, led by Senator Susan Collins (R-ME) presented President Biden with a $600 billion compromise package in early February, but after meeting with the President, the compromise was abandoned. In a Twitter post, Secretary of Treasury sided with the President in his push to go big with the stimulus bill, saying, “the benefits of acting now- and acting big- will far outweigh the costs in the long run.”