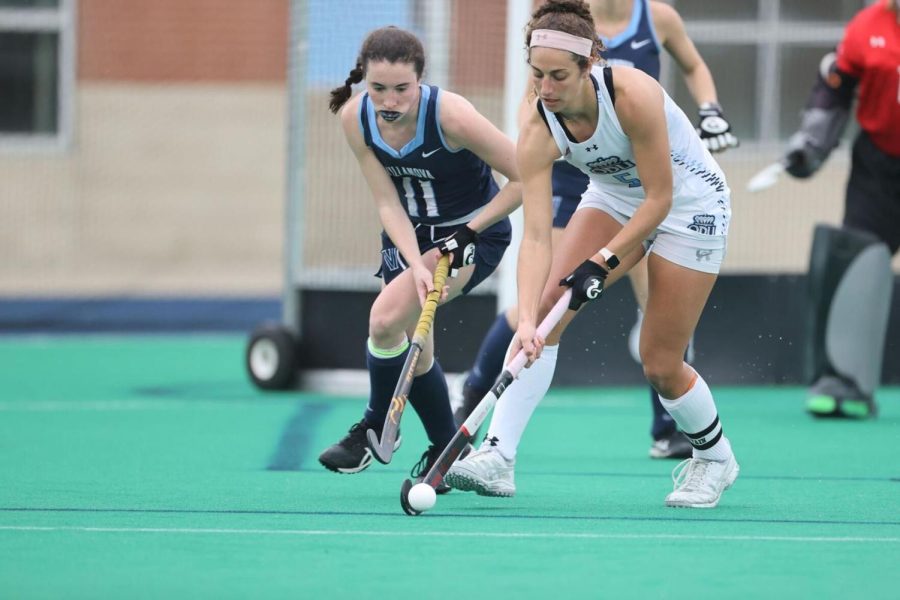 This past weekend, the Villanova’s women’s field hockey team went to Norfolk, Virginia for a pair of games against Big East rival Old Dominion. The Wildcats fell short in both games, moving to 0-4 on the season and 0-4 in Big East play. In their first contest on Friday, the Wildcats lost 4-1 and dropped the second game, 7-0.

Taking a closer look at the game statistics reveals that the ‘Cats impressive defense was on display. The Monarchs finished with 23 shots total, and only 11 of those were on goal. Sophomore goalkeeper Claire Borman started in goal for the Wildcats, facing seven off target shots in the first half. Junior Jordan McGinely started the second half in goal and played a crucial role anchoring Villanova’s defense, facing three shots and notching two saves.

Throughout the first four games for the Wildcats, both goalkeepers have made the most of their opportunities in goal. Gorman, the West Chester, Pennsylvania native has made 20 saves and allowed 18 goals, good for a 52.6 save percentage. Just a sophomore, her career save percentage is 59.4. McGinley, a junior from Morristown, New Jersey, has played thirty minutes in each of the last three games, making 16 saves.

The Wildcats also maintained an aggressive offense. Freshman back Sabine De Ruijter tallied her first career goal and the only goal for the Wildcats on Friday. Her first collegiate goal came off of a penalty corner taken by senior Riley Dolan in which she found De Ruijiter at the top of the key, who was able to connect on the shot.

Senior Emily Clarke also tied her career high shots with three total shots on the day. Freshman Jamie Pennington finished the afternoon with one shot on goal. Despite a strong defensive effort, the Wildcats were unable to pull away with a win on Friday.

On Saturday, the Monarchs came out strong and led 5-0 at the end of the first half. McGinley entered in goal to start the second half and notched two critical saves.

Freshman Megan Mitchell got two quick shots off for the Wildcats yet failed to get them past Old Dominion goalkeeper Cam MacGillivray. Additionally, De Ruijter and Caitlin Van Goeverden both placed shots on goal, but these were saved by MacGillivray as well.

The Wildcats will be playing a conference-only schedule this season, except for two games against local squads. On March 27, Villanova will take on Drexel at home and will follow that up with a home match against nearby La Salle. Outside of that, the Wildcats will only be facing Temple, Quinnipiac and Connecticut in the remainder of their unusual spring season.

The Wildcats will suit up again next Saturday for their home opener against the Temple Owls at the Proving Grounds at 3 p.m.