‘Nova students act out against poverty 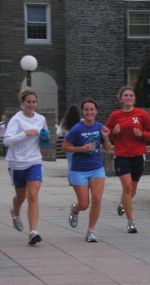 The University is recognizing the 35th annual Hunger and Homelessness Awareness Week through on-campus events aimed at raising awareness about global issues of poverty this week.

HHAW strives to provide students with a new learning experience by combining education and action.

HHAW’s Augustinian connections are of particular importance to Villanova’s involvement, since the values of peace and justice are promoted as well.

The 5K Hunger Run took place at the Oreo on Monday afternoon, and the Fair-Trade Craft Sale occurred all day Tuesday and Wednesday in Connelly Center. The Hunger Banquet, which is a simulation event that focuses on the world’s food distribution, was held Tuesday evening in the East Lounge of Dougherty.

Will O’Brien, a speaker from Project H.O.M.E., spoke in Falvey Memorial Library on Wednesday afternoon. Project H.O.M.E. (Housing, Opportunities for Employment, Medical Care, Education), a Philadelphia-based cause, works to combat homelessness and poverty. It promotes outreach from local communities to help develop struggling Philadelphia neighborhoods and bring them to their potential for living conditions.

Wednesday night at the Oreo was also the Sleep Out event, where students and Villanova staff got the opportunity to simulate housing situations that the homeless experience on a daily basis. This aspect of HHAW has grown significantly with each year’s program, and Zavarich notes that it one of the most important features of the week’s events.

By donating one meal to Dining Services, students can partake in today’s Fast Day. The purpose of this event is to gain solidarity with the poor through self-sacrifice. For each meal donated, Dining Services will donate $5.

All donations and money received from this year’s HHAW will be donated to two causes: Oxfam International and Catholic Relief Services.

Oxfam International is committed to increasing knowledge about social and economic imbalance. According to its Web site, Oxfam “strive[s] to be a campaigning force promoting the awareness and motivation that comes with global citizenship.” Founded in 1995, Oxfam is a contributing factor to annual efforts made against poverty worldwide.

Catholic Relief Services provides direct assistance to struggling communities and establishes ways for people to assist with their own development. The CRS Web site states that they, “foster secure, productive, just communities that enable people to realize their potential.” The Catholic Bishops of the United States founded CRS in 1943, and it has maintained a close relationship with Villanova through other aspects of campus life.

Hunger and Homelessness Week will conclude on Saturday with a workshop from Gerry Straub called “Putting the Power of Film at the Service of the Poor.” Falvey Memorial Library will host this event, and it will take place from 9:30 a.m.-3 p.m. Straub is an award-winning author and television producer whose work focuses primarily on the troubles of the poor.

Despite involvement from over 500 campuses and communities, Villanova sponsors the oldest Hunger and Homelessness Week in the country. Rev. Ray Jackson, O.S.A., founded the program in 1972 with several students who were committed to the ideals of education and change. Each year, HHAW has seen increased participation and amount of money raised.

In 2002, the National Student Campaign Against Hunger and Homelessness presented Villanova with the “National Build a Movement Award” for years of dedication and innovative work.

Last year’s Hunger and Homelessness Awareness Week at Villanova raised a total of over $10,000 and collected food for various local shelters in need.

Cans that were collected from Villanova students, as well as turkey dinners, were donated, and over $2,000 of fair-trade crafts were sold during the week’s craft sale. Additionally, record numbers turned out for significant events such as the Hunger Banquet, the Faces of Homelessness Panel and the HHAW Sleep Out.

Other colleges also raise significant funds from their efforts, but Zavarich said, “Villanova is the most comprehensive” in terms of HHAW events.

Amy Knop-Narbutis, the student chair for the 2007 HHAW, points out that this week is all about poverty and homelessness, and that the overall goal is to “make a contribution to agencies that fight these problems.”