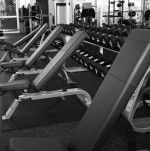 The new Intercollegiate Athletics and Recreation Facility will officially become part of Villanova’s campus, with the unveiling and revealing of the formal name today at 4 p.m. Though it may look small from the outside, inside it is a 55,000 square foot basketball-focused powerhouse. There is a little something for students too in the form of a beautiful, fully-equipped fitness center.

The $18.5 million building, designed by Mark Thompson of Philadelphia-based Mark B. Thompson & Associates, makes excellent use of the tight three-story space. Thompson situated the building with a distinct nod to the Augustinian interest of humanity at Villanova. He explained that the intricate space between the Pavilion and the new building is referred to as a compression space, with emphasis on the descent downward and around into the entrances of both buildings, architectural features modeled after those seen in Catholic Rome and throughout Europe.

The building received no University funding but was built entirely from outside donations: $19 million in total signed pledges. Each donor receives a plaque in the area where they designated their donation to be allocated. For instance, the men’s practice court is named for Ed Welsh, Class of ’66, and his wife, Elaine.

The structure has the added benefit of being the most environmental-friendly building on the University’s campus. The lighting is entirely motion-sensored. Dr. Robert Travor of the College of Engineering assisted with storm water management, and 250 trees were added to the surrounding area.

Upon entrance, visitors are ushered into a circular atrium. The outline of a blue basketball fills the floor space, and the walls bear phrases like, “We Play For Those Who Came Before Us,” a tribute to past Villanova players, and “Villanova in the Final Four,” a spot dedicated to the school’s four Final Four teams – three men’s and one women’s.

The first floor holds the men’s and women’s locker rooms, modeled with custom wood lockers and sleek black leather couches. Twin flat-screen televisions adorn the wall. Each television is wired to send messages throughout the building from a centrally controlled area. The 9-foot tall ceilings and extra-wide 8-foot tall doorways are tailor-made for the extra height of basketball players.

The shared weight room and men’s practice court are just down the hall. The weight room includes custom machines intended for tall players. Designed as a mirror image of the Pavilion court, the practice court is nearly identical in every aspect, ranging from floor decals to wall decorations to lighting.

Slight differences include two extra baskets at one end of the men’s court to accommodate shooting and free throw practice and custom-made flooring with springs beneath to cushion the player’s weight, preventing injury and lasting longer than regular parquet flooring.

The women’s court, on the second floor, has the same size and general appearance, including the custom flooring, with the addition of a pitched roof. Several cardio machines in the corner ensure that injured players remain a part of practice. Students are able to look onto the women’s practice court from the third floor.

Next to the men’s practice court is the sports therapy and training area. Sleek and shiny, the space includes a high-tech hydrotherapy room. Three pools fill the space; one is an underwater treadmill for rehabilitation purposes and the other two are contrast pools, which can be kept hot or cold as needed.

The men’s and women’s programs both have extensive new office space, with the women’s on the first floor and the men’s on the second. They are identical in appearance, with the exception of the head coaches’ offices.

Women’s Head Coach Harry Perretta prefers his office with a sliding door adjoining with the office of Associate Head Coach Joe Mullaney in order to work together more closely. He has a separate room for his conference table.

Men’s Basketball Head Coach Jay Wright opted for a glass-walled office to keep close contact with his team and staff. Automatic blinds extend down from the ceiling if privacy is needed. A conference table fills one side of his office with a digital smart board for easy play diagramming.

Both office spaces include kitchenettes to accommodate long coaching days, locker rooms for the coaches and separate men’s and women’s state-of-the-art video editing rooms. There is also a shared auditorium complete with stadium seating and a large flat-screen TV for team meetings, recruiting presentations and press meetings, if necessary.

But basketball is not the only aspect of this student-friendly building. The third floor is dominated by a student, faculty and staff fitness center. The space contains a wide assortment of 40 cardio machines. These line full-length, windowed walls overlooking the campus, an aspect that Thompson included in order to keep students connected with the outside campus. Three flat screens scattered across the length of the windows provide entertainment.

An extensive area of selecterized weight equipment fills one side. It is separated from the free weight area by a mirrored divider, allowing students to monitor their lifting techniques while keeping the overall open, warehouse structure of the area. This structure is then echoed in the exposed beams and pipes of the white ceilings.

Guests enter via WildCard strips attached to turnstiles. This allows access to all machines, as well as compartments to hold possessions and men’s and women’s locker rooms with showers.

In addition, there is a mirrored room for exercise classes, a conference room and office spaces for club and intramural sports and vending machines with selections from Aquafina, Gatorade, Red Bull and an assortment of chips and candy bars.

Vincent Nicastro, director of Athletics, admits that the building will probably not fulfill the long-term need for student athletic facilities. However, he stresses that it does provide students with better exercise options than the current facilities.

“The building serves as a very visible symbol of the bond between our basketball programs and the students, faculty and staff at Villanova,” Nicastro said. “The integration of the student-athletes with the campus community is really unique to Villanova.”