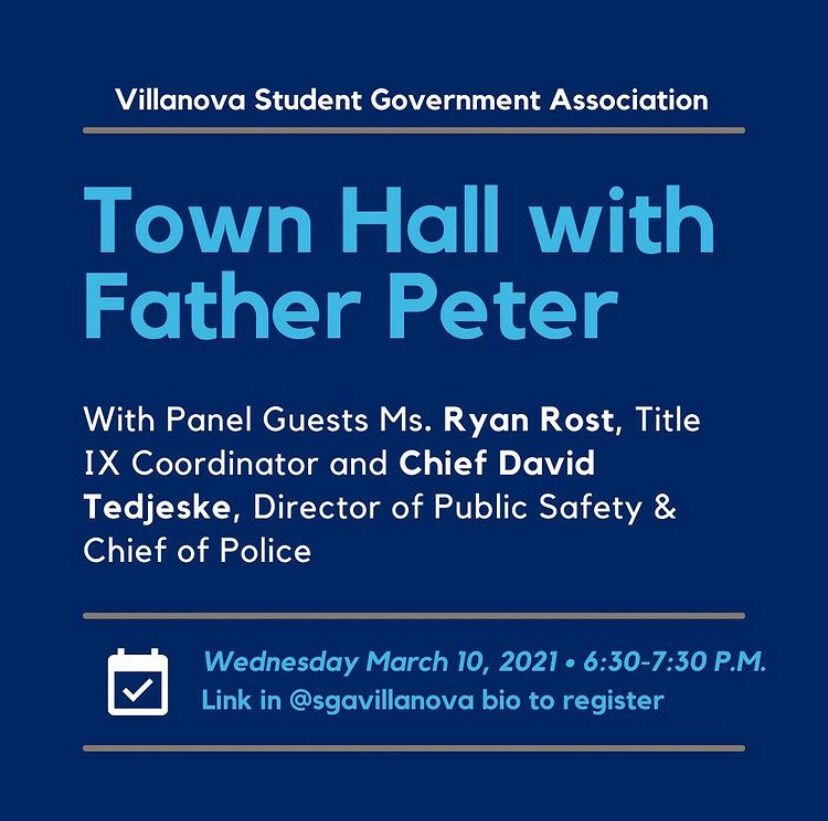 On Wednesday, Mar. 10, University President Rev. Peter M. Donohue, O.S.A., Ph.D. and the University’s Student Government Association hosted a Town Hall to address the sexual misconduct that has recently occurred on campus. Panel guests included Ryan Rost, Title IX Coordinator, Chief David Tedjeske, Director of Public Safety and Chief of Police, Stacey Andes, Director of Health Promotion and a Sexual Assault Resource Coordinator (SARC) and Amanda Rappa, Student Body President. The event was specifically in response to backlash after an email was sent to students on Mar. 3 notifying the community about various reports of sexual misconduct. Students and faculty voiced disappointment in the language and timing of the email. The event took place via Zoom in a webinar format, which only allowed the panel guests to speak. Questions were asked through a chat setting on Zoom and Rappa selected the questions that were asked most frequently.

Rappa opened the town hall thanking Donohue and the panelists for their time and willingness to answer student questions and concerns.

“This is an incredibly confusing and concerning time on campus, but we hope that this event provides clarity on a multitude of issues,” Rappa said. “The Student Government Association’s mission is to serve as the link between students and the University’s administration. We set up this event as a chance for students to have their voices heard.”

Following Rappa’s remarks, Donohue spoke about the main concerns of students. He emphasized that the top priority of the University is the safety and well being of students.

“I am constantly asked what keeps me up at night, and it is the safety of this campus,” Donohue said.

He then went on to explain that the information shared through the email on Mar. 3 was sent with the purpose to inform students about the acts of misconduct on campus and not to act as a news report. He explained that the language of the email was due to federal regulations the University must follow.

“There are specific reasons for the way we reported,” Donohue said. “In the past and most recent reports, there are things we cannot share with you for the protection of the victims and their privacy.”

He assured all viewers that the University wants to be as transparent as possible with community members and that all information provided is accurate and honest. Donohue finished his remarks by saying that “the behavior described in these reports has no place on Villanova’s campus, or anywhere.”

Next, David Tedjeske spoke about some details surrounding the issuance of the safety alert. He explained that the University’s decision to issue a safety alert, as well as the language and content of the alert, are subject to federal standards, including but not limited to the Clery Act. According to The Clery Center, The Clery Act is a “consumer protection law that aims to provide transparency around campus crime policy and statistics” and dictates that “campus officials may issue an emergency notification… in the event of an immediate, significant danger to the health or safety of the campus community.” There are several other factors considered when deciding whether to issue an alert or not, Tedjeske explained, including “the nature of the crime” and “the length of time between the crime’s occurrence and report.”

Tedjeske also sought to clarify the timeline surrounding the safety alert, which many students complained was issued too late. He explained that the incident was reported to a residential assistant on Mar. 1 and the RA submitted a report at 11 p.m. that evening. On Mar. 2, campus police were informed and immediately looked into the situation. Once they had gathered sufficient information to send an emergency notice, it was late on Mar. 2, and Tedjeske explained that it would be better to send earlier the following day, Mar. 3.

Ryan Rost shared her insights next. Rost stressed that although these discussions are difficult to have, they are essential to dealing with these types of issues. She encouraged students to take care of themselves and one another through these stressful times. Rost then explained that the term “sexual misconduct” is used to encompass all acts of sexual misconduct ranging from sexual violence, harassment, domestic abuse and so on.

Rost went on to say that a culture of care and respect is the utmost important goal of the University in these situations. She explained that there are set protocols for students who have experienced sexual misconduct and resources as well. Rost voiced that the school is responsible for dealing with any complaint in a “fair, timely and equitable way.”

Stacy Andes emphasized the campus’ support for victims of sexual assault and explained how a number of resources on campus function. She explained that SARC is “committed to supporting and elevating the voices of those who experience sexual violence” and “to ensure they have the resources and support to make the decisions they choose to.” In a response to a later question, Andes also clarified that SARC has a 24/7 telephone hotline for both victims and those supporting victims of sexual assault. She explained that a common motto they use – “SARC for Life” – emphasizes their ongoing commitment to victims of sexual assault, not just in the moment they first share their experience.

After all panelists made their opening remarks, the Q&A portion of the town hall began. Rappa facilitated the discussion by choosing questions from students and posing them to the panel guests.

The opening question asked about the proactive initiatives the University has in place to prevent sexual assault. Rost explained that students are engaged in conversations around specifically the definition of consent. These discussions include required online courses that students take before attending the University, followed by an open discussion with classmates at orientation. Certain groups on campus, including Sorority and Fraternity organizations, participate in bystander training as well. The coordinator explained that 60% of the student population has completed such training. She ended her response by saying the website for the Office of Health Promotion has resources and events to help support survivors.

The next question addressed the case of sophomore football player Iyanu Elijah Solomon, whose instances of sexual misconduct occurred in 2019 and were never reported to the student body. Students wanted to know why Solomon’s case was dealt with differently than the recent assaults on campus. Tedjeske explained that “each case has individual characteristics.” He highlighted the University’s desire to “respect the wishes of the victim in how to proceed.” He also explained that whether information surrounding cases is made public is subject to the decision of the District Attorney, who has ultimate discretion in whether to charge a criminal case and release information about the incident. Donohue emphasized that “no names are ever given out,” stressing that “we would never release names.”

Rappa then asked the panelists why the University cannot release the name of an accused offender. Donohue explained that privacy remains a priority for all individuals involved. “It does not serve any purpose to release people’s names without students having all the information,” Donohue said. Rost then added that federal laws prohibit the release of names and that the University remains responsible for finding a resolution for all parties involved.

Students then inquired about the phrase, “removed from campus,” within the Mar. 3 email. Donohue said that this goes beyond just the student being restricted from entering the University’s campus. “The person’s family was contacted and asked to bring this person to their private home,” Donohue said. “It was not simply to just be removed from campus, it was you need to leave the area.”

The panelists were then asked what they want students to know about the process of reporting sexual assault. Rost emphasized that all parties who the incident may be reported to, from the SARC team to Public Safety to RAs, are all extensively trained and assured students there will be a “compassionate response.” Tedjeske went on to say that victims can share as much or as little information as they feel comfortable with.

The final question asked how students can support survivors. Rost encouraged students to believe their friends and listen to their experiences. She also said to be patient and recognize that you may want them to take a certain action even when they may not. In the end, it is the decision of the victim to take whatever action they are comfortable with. Andes then listed the resources available for students, including 24/7 SARC services and national hotlines.

Father Peter closed the Town Hall by thanking SGA, the students participating in the town hall and the panelists.

“There are lots of complicated decisions that need to be made, but first and foremost there is a person who has been harmed and that person needs to be cared for in the best way we can possibly do it,” Donohue said. “That is our biggest concern. All of us want this campus to be safe and we have the power and the ability to make it happen – all of us, together, can make this campus a very safe place.”