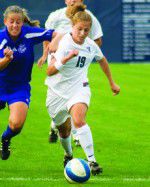 With the stellar defense that has defined the women’s soccer team, only a nonconventional goal could end the squad’s Big East Championship hopes. In the end, it was such a goal that ended its postseason run. After a first-round victory over USF Friday afternoon at home, the ‘Cats were eliminated from the Big East playoffs after a 1-0 loss to West Virginia Sunday.

Villanova started off its weekend with a strong showing versus the University of South Florida in first-round play. Seniors Nikki Mabery and Stacia Hartung each knotted a goal and an assist in the 2-0 victory. The ‘Cats scored a goal in each half, with the first-half goal coming late in the period. Mabery created the play, freeing the ball from a Bulls defender with a slide tackle. Junior Erin Hardiman took possession of the ball and was able to maneuver around the diving USF goalkeeper. Hardiman passed the ball to Hartung, who headed the ball into the empty goal to make the score 1-0.

Although the Bulls came out strong in the second half, firing seven of the first eight shots, the Villanova defense held them at bay. Though the Wildcats had some difficulty clearing the ball out of their defensive zone, they took advantage of one such clear. In the 69th minute, Hardiman took a hard shot on goal. The shot was initially saved by the USF goalie, but Mabery collected the rebound and fired her own shot past the ‘keeper into the left side of the goal for Villanova’s second and final goal of the contest.

Senior goalkeeper Jillian Loyden made four saves in the game and posted her career-best 12th shutout of the season. The Wildcats have shutout their opponents in 14 of the 21 games during the season and hold one of the best shutout percentages in the nation.

Villanova’s next opponent proved to be much more challenging test. After defeating SFU in opening round play, the ‘Cats moved on to the Big East quarterfinals to take on the No. 1-seeded West Virginia Mountaineers. The game marked the seventh-straight appearance by the Wildcats in the quarterfinals.

The match against West Virginia saw a close first half. Villanova put more shots on goal than the Mountaineers by a 4-1 margin and took the half’s only corner kick. This opportunity at the end of the first, however, created scoring chances for both teams. After the kick was taken, West Virginia formed a two-on-one attack back in the other direction, though the shot went wide of the goal. The ‘Cats then got off two of their four first-half opportunities. Freshman Justine Wollner’s shot ended up on top of the goal, and senior Kaley Guthrie’s shot was saved with less than 30 seconds remaining in the half.

The Wildcats entered the second half with their hands full, as West Virginia has scored over 70 percent of its goals in the second half. The lone goal of the contest came off of a free kick taken at the 63:43 mark. Junior Mountaineer Amanda Cicchini initially took the shot but then passed it to teammate senior Carolyn Blank who headed it past Loyden. Although the ‘Cats created several scoring chances throughout the half, they were not able to counter West Virginia’s goal.

After only having to make one save in the first half, Loyden made six saves in the second. Three of the six came after the Mountaineer goal to keep her team in the game. The Wildcats held WVU, the Big East leader in corner kicks, to only two kicks in the match. West Virginia’s first corner kick in the second half was the first that Villanova had allowed in over 280 minutes of play.

Villanova finished the season with a record of 11-4-6. They allowed just 11 goals, the fewest single-season goals ever in Villanova history.