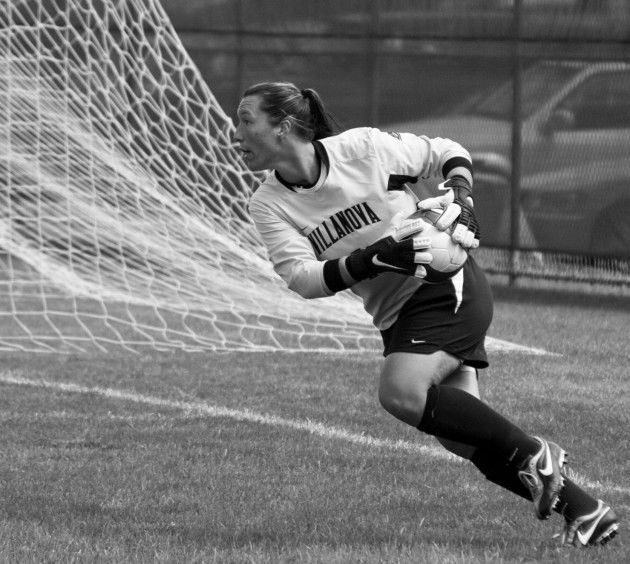 Many changes have occurred in Villanova sports over the past four years, but one constant has been the almost impenetrable defense of the women’s soccer team. For these four years, the renowned backline has been led by senior Jillian Loyden. Any time you hear the words “Villanova women’s soccer team,” chances are the name Jillian Loyden is uttered as well. Red-shirted as a freshman in 2003, Loyden was a member of the Big East Championship team that year. She used the leadership present around her to begin to influence the next year’s squad.

As a starting goalkeeper for the ’04 team, Loyden consistently brought a level of play to the field that has been unmatched by any keeper in the Big East. Her records and honors are numerous and almost impossible to list, but here are a few to give you a taste of Loyden’s brilliance over the past four seasons: She is the first player ever in conference history to be three-time Big East Goalkeeper of the Year. Loyden holds the school career records for victories (48), shutouts (37, which puts her ahead of all active Big East goalies and second in conference history) and minutes played (7,542:04, 10th all time in NCAA Division I history). Since 2006 Loyden has more solo shutouts than goals allowed.

Loyden clinched several of her records in 2007, her best season to date. This season she posted 12 solo shutouts while boasting an unbelievable .52 goals against average (the lowest average in the team’s 25-year history as a varsity sport at Villanova) and a .891 save percentage. Loyden tied the program record with the fewest goals allowed in a season, only allowing 11 goals all year.

Led by Loyden, the ‘Cats finished with a record of 11-4-6, the fourth winning record that the goalkeeper led at Villanova.

After seeing all these accolades, it is evident that the women’s team will miss Loyden’s presence between the pipes next season. Any person who has had the pleasure of watching Loyden play over the past four years will agree that she is certainly a pleasure to watch play the game she loves the most. The Villanovan recently had the opportunity to ask her some questions about life both on and off the field:

What activities or hobbies are you interested in outside of soccer?

Besides soccer, I’m really into snowboarding. I try and go at least once a week. Music, college basketball and I have a weird obsession with collecting sneakers. I think I have like 50 pairs.

What is your favorite band and favorite movie?

My favorite band is The Starting Line. As for the movie, it’s a toss up between “The Notebook” – I’m a sucker for a good cry – and “Cinderella Man” because it’s so motivating.

You seem to keep yourself quite busy. What is a normal day like for you?

My days are pretty busy nowadays. I get up every morning and have strength and conditioning workouts at 8:30 a.m. with my goalkeeping coach before I go to class for the day. Then get dressed and go to work – I work as a waitress at TGIFridays at the mall.

How old were you when you started to play soccer? Did you always want to be a goalie?

I started playing soccer when I was eight years old. I actually started out as a forward, but about two games into the season we had to switch our goalie because she refused to use her hands. I was the tallest kid back then, so they threw me in there, and I fell in love with the position.

Among your notable list of records and awards, is there one or two that you are most proud of?

I feel very honored over the past four years with the honors that I have received. However, the record that makes me most proud would be the career shutout record here at Villanova. This record is a direct reflection of the defense that I have played behind for the past four years. I have been so fortunate to play behind such talented backs. They make my job so easy, and this record is something that I get to share with them.

Did you have a role model or a player that you wanted to be like growing up or who particularly inspired you?

When I was about 10 years old, I was lucky enough to attend the 1996 Summer Olympic Games and watch the semifinals and finals of women’s soccer. I think that was the event that really changed how serious I became about soccer. I witnessed the U.S. women’s team win a gold medal. It was an amazing atmosphere, and from then on I wanted to be just like them.

This season the team got off to a good start, but then slowed down a little at the end of the season. How did this past season go for you personally and as a team?

Our record this year was not a good indication of how talented this team was. We finished 11-4-6. In those six ties we had great opportunities to score but just got unlucky, hitting post after post. Although we didn’t end up quite like we wanted, the year was still filled with great moments and unforgettable memories.

What is the one thing that you are going to miss the most about being on the team?

I think the thing I’ll miss the most are my teammates. I have 23 best friends who would do anything for me, and not being around them next year is a bit upsetting. But the seniors are moving on to great things, and the underclassmen are going to be amazing next season.

What is your best memory during your time playing at Villanova?

My best memory would have to be when we won the Big East Championship in 2003. Although I red-shirted that year, it was a great accomplishment for that team and also helped the program move forward in the future. The girls on that team were unbelievably hard workers and wouldn’t have settled for anything less, so it was amazing to be a part of such a tight-knit group like that.