A glimpse into the life of Paris Hilton 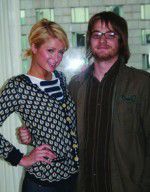 When I was initially approached and asked to interview Paris Hilton, I was understandably apprehensive.

No one likes gorgeous rich people – especially slender blonde ones with a history of partying and uninhibited sexuality.

But, being the selfless man I am, I put my misgivings aside and marched into the Four Seasons hotel, up to the sixth-floor suites … and into Hilton’s hotel room. Life is hell.

Yours truly and a ragtag posse of Philly-area journalists sat down with the heiress herself.

After some awkward pleasantries and Rice Krispie Treats (I kid you not), the interview began.

In what ways have you grown, and how do you ultimately want to be remembered?

“Well, I’m 26 years old now, so hopefully I’m an adult. I would like to be remembered for being a good person and making people laugh and entertaining the world and living life to the fullest. I work a lot with the Make-A-Wish Foundation and the Los Angeles Children’s Hospital, and I’m in the process of developing my own foundation.”

How did you prepare for your role as a hot blonde girl that everybody wants?

(Laughs) “It was a fun role to play actually. I worked with Ivonna Trubbic, who’s an incredible acting coach. We literally were working for like six hours a day for three weeks before we started shooting. But, yeah, it was pretty easy to get into character.”

Paris, I know that you were a producer for the movie. What was that like?

“When I was approached with the script, I then had to go through the casting process and just doing different meetings with the different financers, figure out where we were going to shoot. So, it was cool to be a part of every aspect of the movie, definitely.”

What did you think of your co-star Christine Lakin? She’s given a number of solid performances in her young career. Do you think she has a bright future ahead of her?

“Christine has actually been in a lot of movies. She was on ‘Step by Step,’ that show when we were little. She’s an amazing actress. She helped me a lot.

“I know people are going to want to, like, bash me. So I really wanted to do my best with this movie.”

Are you afraid that in the future you might be typecast as the “hot blonde?”

“Well, in my next film, ‘Repo,’ I am never blonde. Sometimes I have blue hair or black or red or brown. So, in that movie I am never myself.”

Do you really say “That’s hot” as much as you seem to?

“No! I’m just joking when I say it. The media makes me say it all the time! I do it. It’s the businesswoman in me.”

When the interview came to an end, Hilton signed autographs and graciously posed for pictures. As I approached her for mine, she put her arm around me, smiled and said, “Oh, honey! I love your jacket!”

She didn’t say that to the other guys – just me. My jacket is pretty awesome.

Hilton was, above all else, pleasant and polite. She seemed genuinely interested in speaking to us lowly collegiate journalists. At first I thought she might just be acting interested. And then I remembered she can’t act.

While speaking, she looked all of us straight in the eye, smiled widely and even constructed complete sentences. She made us all feel comfortable and answered our questions thoroughly. She wasn’t condescending, absent-minded or distracted by shiny objects.

Despite her public persona, Hilton seemed a truly likable person and not nearly as thick as she often appears. I was pleasantly surprised.

The same, however, cannot be said for the film. “The Hottie and the Nottie” is as awful as its title connotes. If I hadn’t been contractually obligated to park my sorry butt in a seat and watch it beginning to end, I would have done something more productive with my time – like stare into the sun, eat paste or gag myself with a popsicle stick.

Nate Cooper (Joel David Moore) moves to Los Angeles to track down and win the heart of his grade-school crush, Cristabel Abbott (Hilton). But before he can do so, he must find the perfect match for her hideously ugly friend, June Phigg (Christine Lakin).

And I mean this girl is ugly. It’s like if Gollum mated with a rotting monkey corpse. The wolf man wouldn’t take this chick out.

Everything about this movie stinks to high heck. But nowhere is the crap piled higher than on the shoulders of writer Heidi Ferrer. This is possibly the worst-written film I’ve ever seen. I’ve belched better dialogue than this.

The film includes such unforgettable lines like, “They say your body is like an earthsuit … and your soul can’t get out.” Powerful.

Hilton’s performance (if you can call it that) is laughable. She is basically asked to play herself and doesn’t manage that very well. Moore belongs in commercials, the director on the street, the script in the toilet and the whole flippin’ movie straight to DVD.

The movie was a bomb, but Hilton herself was a delight. I went into this thing expecting a circus. But Hilton’s candor, energy and patience made for a great interview. She defied my expectations and, in so doing, challenged me to become a more objective journalist.

Did I mention Paris Hilton liked my jacket?