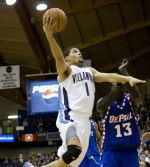 Sometimes it’s not about how you start but how you finish.

The Villanova Wildcats, desperately needed a win at the Pavilion after starting off conference play 1-2. After losing to the DePaul Blue Demons on the road just 13 days earlier, the ‘Cats defended their home court with a thrilling 76-69 victory, despite trailing by as much as 16 in the first half.

Trailing 57-50, the Wildcats exploded for a 15-0 run to catapult themselves ahead in what had been a one-sided game all evening. Antonio Peña scored six-straight points toward the beginning of the run to put the ‘Cats ahead for the first time with just over six minutes to go in the second half. The redshirt freshman threw down an emphatic two-handed jam on a possession that saw Villanova grab three offensive rebounds, putting Villanova ahead 58-57. Villanova sunk its next seven free-throw attempts to grow the margin to 65-57 before DePaul ended its nearly six-minute scoring drought.

“We never mentioned LSU,” Head Coach Jay Wright said regarding the early deficit. “But we have confidence that we are never out of the game. That always helps us in a game like this.”

The teams traded buckets in a heated finish where ‘Nova’s hopes to win the game were put on the shoulders of Peña and Scottie Reynolds. Leading by three with just over a minute left, the ‘Cats confidently went to Peña, one of its two redshirt freshmen, in the post for a score on a baby hook. A Mac Koshwal layup cut the ‘Nova lead back to three at 69-66. The ‘Cats came out of the break entrusting the ball in the hands of Reynolds, despite the fact that he felt sore from an earlier fall into a cameraman, and the team’s leading scorer did not disappoint. The sophomore buried a fade-away 3-pointer from the left wing to put the ‘Cats up by six. Three-straight points by Draelon Burns got DePaul back to within three, but clutch free throws by Reynolds put the game on ice. The duo of Reynolds and Peña combined to score 11 of the Wildcats’ final 13 points.

“The Big East is wide open,” Wright said. “Tthe Blue Demons] are like an NBA team with how big and physical they are.”

Reynolds, coming off a season-high 32 points in a losing effort at Cincinnatio, scored 21 to lead Villanova. Peña finished with 17 points, 14 of which came in the second half and grabbed nine rebounds. Dante Cunningham posted a double-double after keeping the ‘Cats in it in their cold first half. The junior finished with 14 points and 13 rebounds.

The ‘Cats’ much improved offensive play was lifted by a burst of energy on the defensive end after a difficult start. DePaul shot a blistering 64 percent (9-for-14) from beyond the arc in the first half but was held to just 23 percent (3-for-13) from downtown in the second half. Dar Tucker was limited to just four points in the second half despite leading all scorers with 14 at the half. Wright credited a bigger lineup, including the insertion of Corey Stokes and Reggie Redding, for stepping up defensively and limiting the number of open looks DePaul’s shooters got after getting a bevy of wide-open 3-point shots early in the game. The Wildcats’ aggressiveness led to a 43-20 edge on the glass.

“The story of the game was the rebounding and our foul trouble,” DePaul Head Coach Jerry Wainwright said. “This was basically a flip side of what happened at our gym.”

The new-look ‘Cats’ starting five, which featured Grant and Peña making their first and second starts of the season, respectively, faced a red-hot shooting performance by DePaul right out of the gates.

The Blue Demons seemed to move the ball with ease around the perimeter, locating open shooters, who buried their 3-point attempts at an alarmingly high rate. Five of DePaul’s first six field goals were from downtown, including three by Burns, who scored 20 the first time the two teams met. Tucker led all scorers on 5-of-9 shooting, including four 3-pointers.

Cunningham kept the Wildcats afloat in a tough first half, leading the team with 10 points and 10 rebounds.

Villanova will return to action on Saturday to take on Syracuse, looking to take the next step in establishing itself in what has proven to be a difficult road to Big East success.