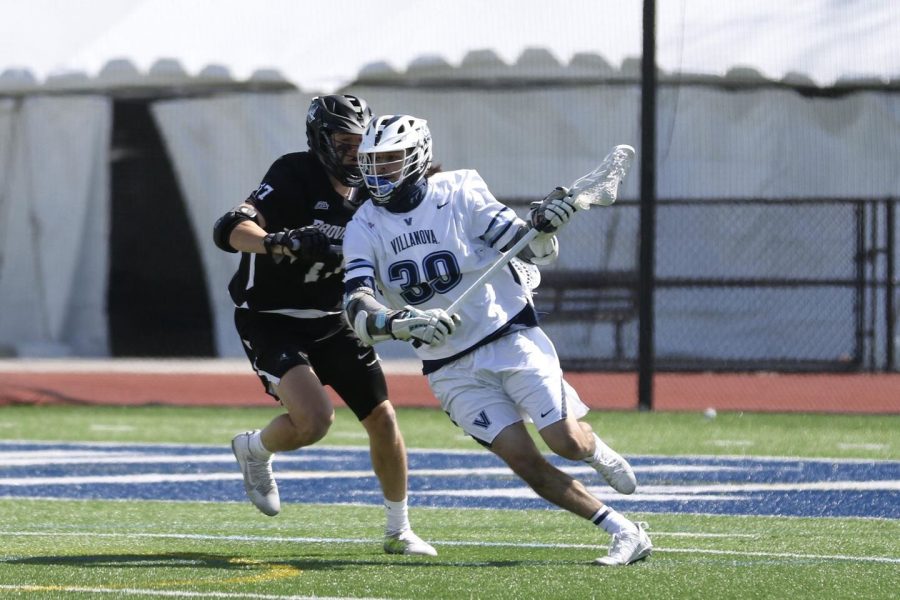 This Saturday, the men’s lacrosse team hosted Big East rival Providence. This game was its second competition against the Friars this season. In the first game between these two, the Wildcats pulled away with an 11-8 win. The ‘Cats came out with the same intensity on Saturday and beat the Friars, 13-6.

The Wildcats maintained a strong offense throughout the game, led by senior Keegan Khan, who notched a career-high seven goals. Khan scored his first just a minute into the game and his second goal 10 minutes later. At 4:26, freshman Tucker Goodelle dished it to junior Patrick Daly who found the back of the net, making it a 3-0 lead. The Friars got on board soon after Khan’s third goal of the afternoon at 3:30, making it 5-1 at the end of the first quarter.

In the second quarter, both the Wildcats and the Friars netted a goal. Daly scored for Villanova and Evan McGreen scored for Providence, making it 6-2 at the end of the half. Junior Matt Campbell opened the third quarter strong, scoring just a few seconds into the half. The Friars answered a few minutes later.

Khan’s scoring run continued into the final quarter, as the senior netted the first two goals just over 30seconds apart to make it 10-3. Senior Colin Crowley netted a goal on a pass from Campbell, and Khan scored his third of the quarter to make it 12-3. The Friars scored at the 6:14 mark to endthe Wildcats’ 5-0 run. Khan’s goal scoring was not done yet, as the attackman scored his seventh of theday at the 3:57 mark to make it 13-4. Providence scored two more in the final seconds to makeit 13-6.

The Wildcats will head to Colorado to play Denver on Saturday, April 10 at 2 p.m.