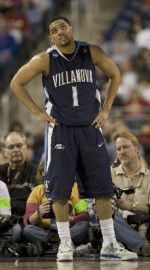 DETROIT – Midnight has struck for this Cinderella. Actually, it was 11:57 p.m. EST, but the No. 1-seeded Kansas Jayhawks (34-3) expedited the travel back from the Motor City for the No. 12-seeded Villanova Wildcats (22-13) with a 72-57 victory in the Sweet 16. After seeing the No. 10-seeded Davidson Wildcats (29-6) handily defeat the No. 3-seeded Wisconsin Badgers (31-5) in front of a crowd of 57,028 at Ford Field, Villanova tried to match its fellow Cinderella. But the Jayhawks were just too much and showed just how formidable they are.

The Jayhawks got off to a quick start, hitting their first 10 of 12 shots, many of them coming from three-point land. The Jayhawks kept the intensity up the entire game as they cruised to victory. In the second half, even when Villanova would make a tough bucket, the Jayhawks time and time again came up with an answer. The constant answers from Kansas seemed to deflate Villanova, as it could never quite get into the flow of the game.

“We played a great team,” Wright said in a post-game press conference. “What we feared was that we weren’t going to be able to score and they did a great job defensively. They’re playing really well and they have some great confidence right now. We had to play our best game tonight, and we didn’t.”

An air-ball from sophomore guard Scottie Reynolds started the game and another quick Reynolds’ miss set the tone for the first half and the rest of the game as the Jayhawks combined a strong and well-balanced attack down low with strong three-point shooting to control the tempo from start to finish. Senior guard Russell Robinson held Reynolds to 11 points on only 4 of 13 shooting as suffocating defense down low and unmatched athleticism were the themes of the night.

The Jayhawks held the Wildcats to just 36 percent shooting from the floor and a dismal 3 of 17 from the three-point line.

“They did a good job on ball screens, and sometimes I would force the issue too much,” Reynolds said. “A couple of times I was playing with the ball too much and they were quick guards. They did a great job of forcing me around the perimeter.” The first half was all Jayhawks and even when Villanova tried to switch from their usual man-to-man defense to a 2-3 zone, that proved just as fruitless as Kansas’ athleticism was still too much for Villanova Head Coach Jay Wright as Kansas was able to convert six alley-oops and 19 fast break points.

Tonight’s win over Villanova was Kansas’ 10th consecutive win and is the Jayhawks’ second-longest winning streak of the season. The victory also sends Kansas to its third Elite 8 game in the last five seasons. Kansas junior guard Brandon Rush, the Most Outstanding Player of the Big 12 Championship and the leading three-point shooter on Kansas led all scorers with 16 points on 6 of 12 shooting from the field.

Kansas Head Coach Bill Self said in a press conference Thursday afternoon that Villanova’s tenacity and relentless could have been the factor that would decide the outcome of the game.

“The thing that stands out is how hard they play and how hard they compete,” Self said. “They take great pride in getting 70 or 80 percent of the 50/50 balls. They steal extra possessions for their team. I think they’re great defensively and they’re getting better.”

But, it was Jayhawks tonight that got to every loose ball and caused several costly turnovers on the younger, more inexperienced Villanova team. It was also the Jayhawks that took care of the ball when they needed it most.

“We’re going to learn a lot from this game,” Wright said. “When [Kansas] needed a big shot, they got it and their experience definitely showed. They had 18 turnovers, but their turnovers were doing the right thing, making the right pass.”

The Jayhawks, who entered the NCAA Championship ranked No.4 nationally in both the ESPN and AP/Coaches Poll, averaged 81.4 points per game and led the nation in scoring margin at +20.0. They face a red-hot Davidson team on Sunday, led by sophomore stud Stephen Curry, who is averaging 34.3 points per game in the first three games of the tournament.