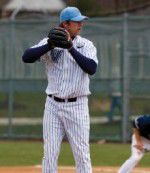 Riding a two-game win streak, the baseball team entered its matchup against the perennial Big East contender Louisville Cardinals trying to claw into the Big East playoff picture. However, Villanova endured a difficult series with the Cardinals’ outscoring the Wildcats 25-9 in the three-game series. Although the Wildcats dropped the first two games by a combined score of 24-9, the team delivered a brilliant performance in the third game, backed by sophomore Brian Streilein’s strong outing. The first game of the series featured a see-saw battle between the two teams, with the Wildcats clawing back in the top of the sixth to erase an early 3-0 deficit. Junior Wes Borden’s three-run homer off Louisville starter Zack Pitts, tied the game at three and appeared to shift the momentum toward the Wildcats. However, three defensive miscues in the bottom of the sixth inning started the demise of the Wildcats and starter Jordan Ellis. Ellis finished the game after giving up nine runs in 5.2 innings; however, only three of the runs were earned. The Cardinals knocked Ellis out of the game with two outs left in the fifth inning when Louisville’s Chris Dominquez and Andrew Clark delivered back-to-back singles to drive in three runs. A dropped fly ball with one out proved costly, as a fielder’s choice on the next play would have ended the inning and halted the Cardinals’ offensive barrage in the sixth inning. Instead, the Cardinal’s capitalized on the Wildcats’ errors and won the game by a score of 12-5. “In our last two Big East series, we have made a few errors that teams have been able to capitalize on, and that’s part of the reason why we have lost those two series,” junior pitcher Kyle Carver said. Entering the second game, the Wildcats tried to tame the Cardinals offense. However, Louisville continued its offensive barrage while also delivering a masterful pitching performance. Louisville sophomore Justin Marks stifled the Wildcats’ bats, tossing a four-hit, one-run performance over eight strong innings. Senior shortstop Derek Shunk would provide the lone bright spot for Villanova, connecting on his second home run of the season in what was a rather lackluster overall performance by the Wildcats, who dropped their second game in a row by a 12-1 score. “They played harder then us and with more energy in the second game,” Carver said. “They basically dominated us in all facets of the game.” Aside from Shunk, who delivered two of Villanova’s five hits, Marks continually shut down the Wildcats’ offensive attack. Last season, Marks captured the Big East Freshman of the Year Award, leading the Big East in starts (18) and opponent’s batting average (.189). Louisville’s offense continued to sparkle, driving in 12 runs for the second consecutive game. Louisville jumped out to an early led after executing a small-ball approach in the bottom of the second to place five runs on the board. After loading the bases, back-to-back singles by Drew Haynes and John Dato broke open the scoreless affair. Every starter for Louisville had at least one hit, with the team collecting a total of 16 hits.Looking to avoid a series sweep, the Wildcats salvaged the third game of the series by recording a 3-1 victory over the Cardinals. Strelein delivered a dominant pitching performance. Over eight innings, Streilein scattered five hits and only surrendered one run. “Streilein was dominant,” Carver said. “He was able to keep the hitters off balance and shut down a good Louisville offense. We played with more energy during the third game, and we realized how important it was if we were going to make a run to earn a berth in the conference tournament.” Streilein’s performance was almost negated as Louisville freshman Bob Revesz matched Streilein pitch-for-pitch, delivering 6.2 scoreless innings. Entering the eighth inning, the Wildcats trailed 1-0. However, a lead-off double by Shunk propelled a Wildcat rally that was capped off by back-to-back RBI singles by Borden and Carver. Carver’s game-winning RBI single was critical as Villanova avoided being swept in a conference series for the second straight weekend. More importantly, the victory helped keep the team’s hope of staying in the race for a spot in the conference tournament.