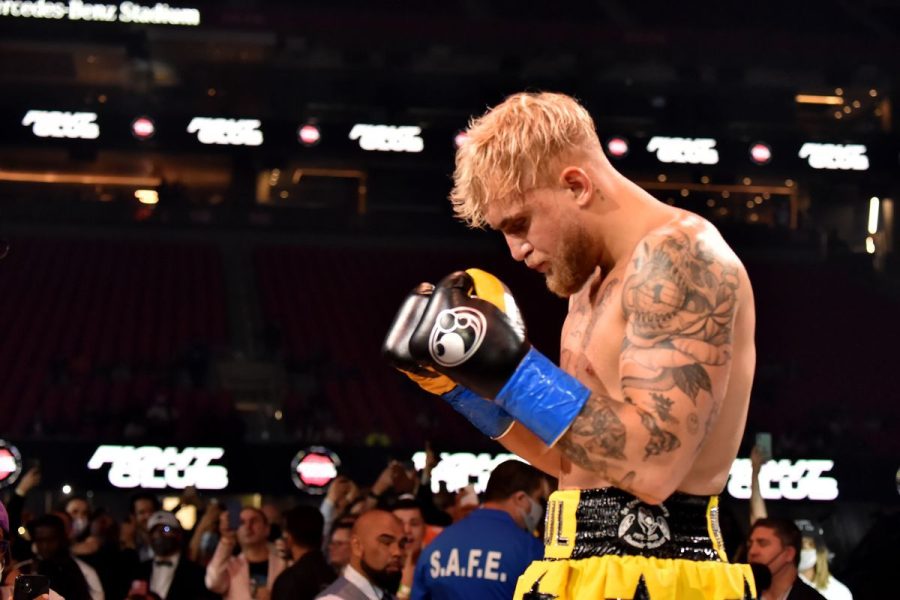 Jake Paul has made the transition from YouTube star to boxer in recent years.

The Jake Paul versus Ben Askren fight on April 17 earned more than one million pay per views, top celebrity appearances and as was surely to be expected, controversy.

But, while many are only talking about whether or not Paul’s first-round knockout was preplanned, the larger question at hand remains: should we even continue to further the career of this notoriously polarizing figure?

On April 22, the New York Times published an article surrounding harmful experiences with Paul. The main focus of the article was around AJ Mitchell, a musician that joined Paul’s influencer house, Team 10, at the age of 14.

After Mitchell’s parents received clarity from Paul’s parents and assistance over living arrangements and safety, Mitchell signed a contract that gained him free rent in exchange for giving Paul a large cut of his monetization, as well as contributing to Team 10 brand deals. However, upon his arrival at the house, Mitchell says he slept on the floor, was constantly harassed with pranks and was thrown into Team 10 parties, which were flooded with alcohol and drugs. Again, Mitchell was only 14 years old. He also began dating a girl nearly a decade older than him. Mitchell’s allegations align with many previous Team 10 members’ stories, such as Alissa Violet, who claims Paul verbally and emotionally abused her. These types of allegations have been public for years, but Paul is seemingly invincible to cancellation.

The most disturbing allegation against Paul was made by Justine Paradise, a TikToker who claims she was sexually assaulted by Paul in 2019. Paradise posted a TikTok about her experience on April 9 of this year. The details in her story are tragically alarming. Because of Paradise’s following and ability to get her story out to the public, a few others have come forward with their own stories about Paul.

Many are speculating that Pete Davidson, who was hired by Paul to interview him and cover the fight, asked about Paradise’s allegations. During his locker room interview, Davidson’s question was muted, as Triller (the sponsor of the fight) pulled the kill switch in an effort to avoid controversy. Paul was clearly not happy and appeared shocked by the question, leading many to believe it was indeed about the accusations against him.

Davidson then went on to talk to Paul’s opponent, Askren, and tell him that no one is rooting for Paul because of his terrible reputation. This obviously did not sit well with Paul.

While Davidson’s awkward remarks were candid and probably what a lot of people were thinking, it begs the question: if we all hate Jake Paul, why do we continue to support him? Even if we are not rooting for him to win, more than one million people paid to watch him fight. In Davidson’s case, he accepted Paul’s money and attended the fight, plastering his face all over the promos and ultimately increasing viewership. Yes, I am glad Davidson pointed out Paul’s accusations at the Triller event but, why is there even a Triller-sponsored event for Paul in the first place? Why are companies and celebrities comfortable being associated with him and taking his money and for that matter, why are people in the public supporting any platform with his name on it?

It seems like stories that reflect poorly on Paul’s character, whether it be taking advantage of smaller influencers, disrupting neighborhoods, calling COVID-19 a hoax or sexual assault, are never-ending. And yet, Paul is currently starting a new venture fund that has attracted support from Silicon Valley and continues to gain fans through his new boxing career. While the vast majority of us recognize Paul’s entire rise to fame as disappointing or even undeserved, we continue to debate over the logistics of his fight or the mystery of his next opponent.

I think everyone should continuously think about which Paul news story they are talking about. Is it how fast his last knockout was, or is it Justine Paradise’s allegations? And, if you are talking about it, is it with some type of admiration because of a fascination with his rise to fame, or is it with disgust over his actions and a belief that he should not continue to succeed? If you recognize that Paul should not have a platform, I encourage you to not purchase or support his next fight or business endeavor and, instead, be vocal about the need for accountability.