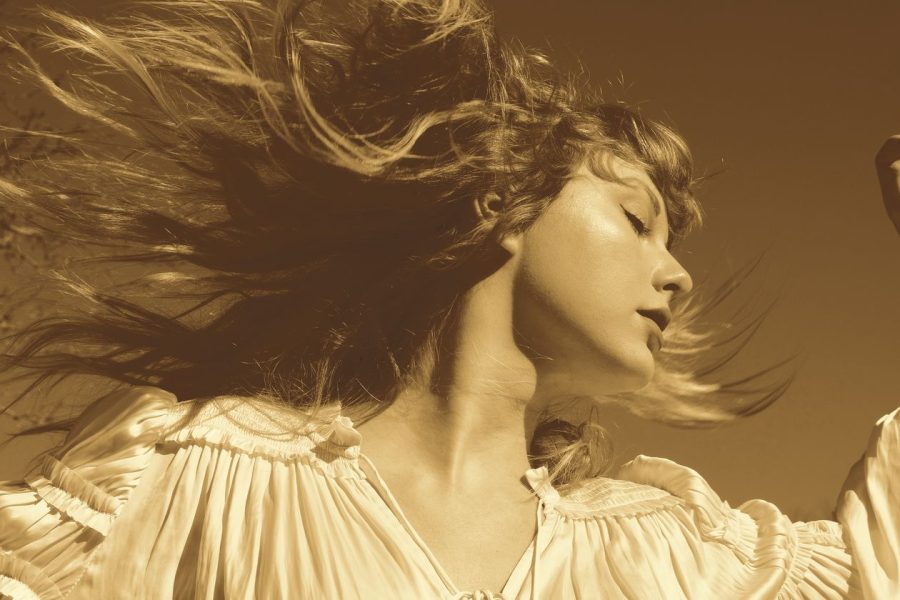 Taylor Swift’s new album cover is a mature version of her original version.

On Friday, April 9, Taylor Swift re-released her 2008 country album “Fearless.” Already featuring some of her most iconic songs including, “Love Story,” “Fifteen” and “You Belong With Me,” the album also graced fans with six new songs from “The Vault,” which were written but never released during the original release of the album.

“Taylor Swift was able to not only reclaim her old music but also release new and amazing songs from the vault, songs that still have the nostalgic vibe and sound of the original Fearless album,” sophomore Grace McDermott said. “Most ‘Swifties’ have grown up listening to her music, so it’s really sentimental and inspirational to listen to the re-recordings of your favorite songs growing up.”

Fans have also taken to social media, sharing their support and adoration for Swift. For instance, fellow celebrity Sophie Turner, who is the wife of Swift’s ex-boyfriend Joe Jonas, shared her reaction to the early release of “Mr. Perfectly Fine,” a song which heavily calls-out her husband.

“It’s not NOT a bop,” Turner said on her Instagram story with the song playing in the background.

This release is the first of six re-recordings Swift will produce after the expiration of her contract with Big Machine Label Group as of November 2020. All re-released albums will feature the tag “Taylor’s Version,” distinguishing her now self-owned work from the masters which have been withheld from her for 15 years.

Unbeknownst to Swift, Big Machine was absorbed by Scooter Braun’s Ithaca Holdings LLC in June of 2019 for $300 million. In under two years, Braun secretly sold her entire 2006-2017 master catalog to Shamrock Holdings with a caveat that allows him to continue to profit from Swift’s work.

“This was the second time my music had been sold without my knowledge,” Swift tweeted last November, referencing both sales.

Therefore, “Taylor’s Version” of Fearless marks a monumental moment in the music industry as artists are rarely able to control their music. For example, after a nearly 50 year-long fight, Paul McCartney finally filed a lawsuit in 2017 in hopes of gaining ownership of The Beatles nearly 250 songs after Michael Jackson’s purchase of the work in 1985.

Although Swift is now almost twice the age she was when the album was initially released, the new recordings sound quite similar to the original. Nevertheless, some small but important changes are audible on “Taylor’s Version” which reflects the growth the artist has undergone in the past 13 years.

Junior Victoria Bock felt nothing but empowerment listening to “Fearless” (Taylor’s Version) this past Friday.

“If you listen closely, you can hear and feel the passion Taylor is singing with and the freedom to express her own choices,” Bock said. “Most notably, in “Forever and Always: Piano Version (Taylor’s Version),” she has a line ‘and here’s to silence that cuts me to the core.’ She takes this brief pause after ‘silence,’ adding such an incredible amount of emotional depth that 31-year-old Taylor knows all too well.”

Swifties have already begun searching for Easter eggs that will reveal which album she will re-release next, many believing it will be Swift’s 2014 album “1989.” This was one of her most commercially successful albums as it won the Grammy for Album of the Year, best Pop Album and Best Music Video in 2015.

Needless to say, no matter which re-recording comes next, Swift will continue to astonish fans as she takes back control of her catalog, demonstrating through her lyrical genius that with time, determination and self-reflection, anything is possible. This correlates with a message central to the song

“Fifteen,” a fan favorite from her “Fearless” album:

“When all you wanted was to be wanted / Wish you could go back and tell yourself what you know now / Back then I swore I was going to marry him someday / But I realized some bigger dreams of mine.”