Opinion: The Hopeful Return of Gillespie and Samuels 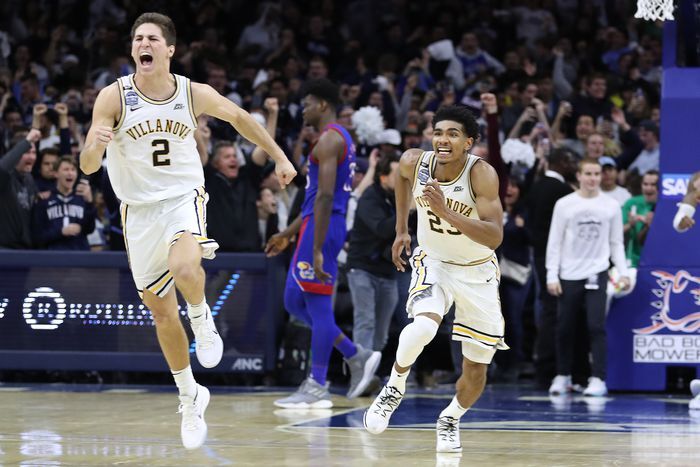 Collin Gillespie and Jermaine Samuels emphatically celebrate a one point 56-55 victory over number one ranked Kansas after Kansas missed a game winning layup on December 21, 2019 at the Wells Fargo Center.

Many members of the Villanova community wondered if the Sweet 16 loss to Baylor would be the last time Jermaine Samuels wore the Villanova jersey. People wondered if this game would be the last image of Collin Gillespie cheering on his team with fellow senior Dhamir Cosby-Roundtree, sporting a Villanova mask on the second level at Butler Fieldhouse. Would the last Villanova basketball memory of him be when he grabbed at his leg in pain while jumping off the court at the Finneran Pavilion on senior night?

The answer is an emphatic no, as both Samuels and Gillespie announced on their separate Instagram accounts on Tuesday night that they will be utilizing the extra year of eligibility granted to them by the NCAA due to the COVID-19 pandemic.

“I have decided to come back for another season,” Samuels said in his statement. “There’s nothing like playing Villanova basketball, wearing that V on my chest and playing for my teammates and coaches.”

“I am going to take advantage of this extra year and come back to Villanova!” he said. “It is going to be a blessing to put the Villanova uniform on for one last year and play for such an amazing University!”

This is so important because both of these players are proven leaders and very talented on the floor. From a Jay Wright-coached team, I would expect nothing less, but people who follow sports more closely see there are many top players who only care about the SportsCenter highlights of draining triples or putting someone on a poster when they dunk. However, these aren’t the plays that create wins and unite a team. Often, players are lackadaisical or simply do not want to play defense, which hurts teams because they need all five players on the floor to be on the same page.

This is exactly what Gillespie and Samuels emulate every game. They always have the team focused on what needs to be done collectively to win games. This is why Villanova has the ability to win the grind-it-out defensive type of game when the shots aren’t falling, the winning score doesn’t break 50 or its special shooting to score in the mid 80s with several three pointers isn’t working. In addition, the effort and hustle that isn’t reflected on the stat sheet is more important to establish the Villanova basketball  mentality and unite the team for a 110% effort on both sides of the floor. On offense, these leaders demonstrate consistent extra passing and unselfishness when other guys are more open. On defense, they are both constantly diving for loose balls and coming in from behind to get the pickpocket steal. Sometimes, they don’t always get the steal, like when Samuels slid from the three point to under the basket against Butler earlier in the year. It may have looked funny, but it is a testament to the fact that he plays hard and well on defense, which is a testament to his character and tenacity.

The expectations for this team next year have been raised with Gillespie and Samuels coming back. The void of leadership would have been filled if they chose not to come back. and the team would have a tougher time in the beginning of the season while figuring out who the go to guys are. With their return, it is known that Collin is an all-around great player who can lead the team like a general on the floor with his crisp passing, deadly deep shooting and crafty finishes at the rim. Samuels has proven to be an alpha male when he needs to be, like in the Providence game at the end of the season when both Justin Moore and Gillespie were out, and he is relentless on defense. Also, their leadership will help the underclassmen find their roles and have timely contributions.

Villanova made the Sweet 16 without its best player and gave Baylor a true scare, unlike the rest of the teams in their last three games before winning it all. The team had a seven-point halftime lead, and a team run by Gillespie would not have allowed the offense to commit 10 second-half turnovers and basically give Baylor the game.

The time is now.  Let’s run it back and savor a national championship next April.