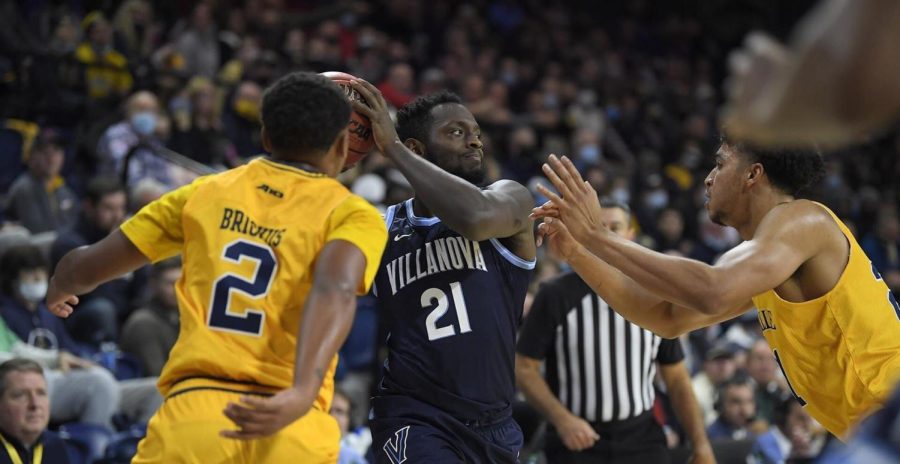 Graduate forward Dhamir Cosby-Roundtree has played in the last four games for the 'Cats after not playing since March 2020.

In what was a shock to the entire ‘Nova Nation, Dhamir Cosby-Roundtree, one of the backbones of the Wildcat Men’s Basketball team, stepped onto the hardwood against La Salle, his first game action since Mar. 7, 2020. He played for five minutes and put up two points, two rebounds and one assist.

Just before the beginning of the season, Cosby-Roundtree made an announcement to the Villanova community regarding the state of his Villanova basketball career, and the news was not great. Cosby-Roundtree was inactive last year due to a series of leg injuries he endured since joining the team in 2018, but there was hope that the injuries he sustained then would hopefully subside in time for him to come back for his extra year of eligibility. However, the accumulation of injuries would catch up to him again as he damaged his leg once more this off-season. The medical staff felt the damage had been done and it wasn’t the right decision for him to play.

“I kind of had to make a tough decision, where I had to think about my physical and mental health and just evaluate that…I’ve had four surgeries in the past five years,” Cosby-Roundtree emotionally told the Philadelphia Inquirer.

Now, it looks like the medical staff feels comfortable with him stepping onto the court.

Coach Jay Wright told VU Hoops just before the matchup, “He’s been practicing with us and feeling pretty good so we’re going to make him an active part of our roster…I don’t know if we’ll use him or not but I didn’t want to shock any of [the media] if we put him in.”

Cosby-Roundtree looked comfortable and in tune with the game, which was a pleasant sight for all of Villanova to see.

“So far so good…We’re starting to get more comfortable with him doing back-to-back practices,” Wright said after the game. “It’s three games in a week, but he was able to practice Monday and Tuesday, and we expect him to be available tomorrow.”

And he was. He laced up for the second time this season against Penn, this time for just three minutes with one rebound. This was then followed by 1his longest stint of the season in Saturday’s game against Saint Joseph’s, with 11 minutes, three rebounds and two assists in a 81-52 victory over the Big 5 rival.

With Cosby-Roundtree back and hopefully continuing to make the progress the coaching staff is looking for, he should be able to provide the depth at the big-man spot that is so desperately needed, while still providing valuable mentorship.

Villanova’s next game is in the Mecca at Madison Square Garden against Syracuse on Dec. 7. Although it remains to be seen how much Cosby-Roundtree will play against better opponents, the fact that he’s able to play is not only a victory for him, but for Villanova basketball as a whole.