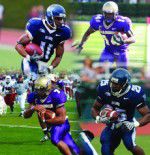 For the second time this season, the Wildcats will host the No. 1-ranked team in the FCS when they take on the James Madison Dukes on Saturday. The first time was against the Richmond Spiders, and Villanova pulled off the 26-20 upset. With that win and four others under its belt, No. 9-ranked Villanova has built a 5-1 record with the one loss coming to FBS opponent West Virginia. The 6-1 Dukes come in well-rested after their bye week, and besides trying to maintain their No. 1 ranking, they will also be looking to avenge last year’s 35-7 loss to the Wildcats.

The Wildcat offense is coming off a dominating performance in which it scored 44 points against the Rhode Island Rams. Since sophomore quarterback Chris Whitney took over behind center, the offense has been on a roll, scoring at least 26 points in all three of his starts. Whitney has been accurate in the passing game, completing 73.1 percent of his passes and throwing only one interception compared to four touchdowns. However, it is the Wildcat rushing game that is really getting the offense into rhythm. It ranks second in the CAA with 192.3 rushing yards per game, and the dominance on the ground has given the team an average time of possession of 32:13, which is best in the conference. Doing most of the damage on the ground is red-shirt sophomore Aaron Ball. The California native has amassed 513 yards on the ground while finding the end zone six times. Ball has been at his best with Whitney in the backfield, as he has averaged 118.3 yards per game over the Wildcats’ last three contests. Look for the Wildcats to rely on Ball heavily, especially in the red zone where James Madison’s defense is last in the CAA, allowing opponents to score 91.3 percent of the time.

Like the offense, the Wildcat defense had perhaps its most dominant effort of the season last week as it held the Rams to just seven points. The heart and soul of that defense has been senior defensive lineman Greg Miller. So far this season, Miller has totaled 5.5 sacks, 11.5 tackles for a loss and two forced fumbles. He is part of a relentless Wildcat defensive attack that is first in the CAA with 17 sacks. The defense is among the leaders in most defensive categories in the conference; however, its league-leading rushing yards against of 80 per game is by far the most impressive. In the process, the team is holding opposing runners to just three yards per carry. It will be essential to maintain this level of productivity, as James Madison comes in boasting the No. 1 rush offense in the CAA.

The strength of James Madison is its offense, particularly the running game. The Dukes lead the CAA in scoring offense (38.3 points per game), rushing offense (261.7 yards per game) and red zone offense (scoring on 92.3 percent of red zone possessions). On the flip side, the Dukes are last in pass offense (100.7 yards per game) and time of possession (28:38). As can be deduced from the above stats, James Madison relies almost entirely on its running game. The run-heavy offense is led by senior quarterback Rodney Landers. The standout signal caller is a quarterback by name only, as he has rushed for 787 yards and eight touchdowns this season, which are both good enough for second in the conference. He has only attempted 83 passes in seven games thus far and has totaled eight passing touchdowns and three interceptions. Also getting carries for the Dukes is senior running back Eugene Holloman. He has rushed for 424 yards this season. Sophomore Griff Yancey is also a threat out of the backfield for the Dukes. He leads the conference with nine touchdowns and has also amassed 312 yards on the ground this season. All three runners figure to get plenty of chances as the Dukes try to figure out the Wildcat rush defense.

The Dukes’ defense does not come in with the accolades of their powerful offense, but it has still put together strong numbers in 2008. It has held opponents to 21.3 points per game and 312.4 yards per game, both of which are third best in the CAA. James Madison’s most talented playmaker on defense has been senior free safety Marcus Haywood. In his final year, he leads the team with four interceptions and 55 tackles. He will need to step up and try to get his team to lock down in the red zone, where the Dukes are last in the conference in stopping teams from scoring. While Villanova clearly relies on its rushing game, its passing game has been effective under Whitney, so the Dukes must look to contain both the rushing and passing attack on defense in order to come away with a victory.

The contest on Saturday will be a classic battle of strength versus strength as the Dukes boast their CAA-best rush offense against the Wildcats’ CAA-best rush defense. It will be nearly impossible to shut down the Dukes’ rushing attack altogether, and instead, look for the Wildcat defense to try to take either Landers or the combination of Holloman and Yancey out of the game. With the Dukes’ reluctance to throw, Villanova will be able to put extra defenders in the box to try to accomplish this. On offense, Villanova should continue what it has been doing as long as it sticks to what has made it so successful the past few weeks by rushing the ball and having Whitney make smart decisions. By defeating then-No. 1 Richmond earlier this season, Villanova has gained invaluable experience that should have the team both prepared.