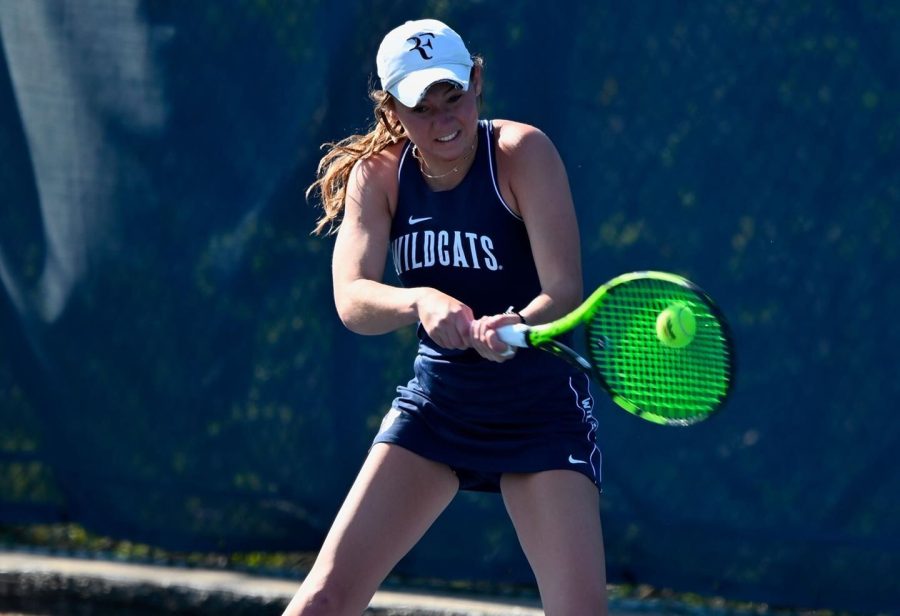 The women's team beat St. Joseph's, Providence and UConn on the week.

Both Villanova tennis teams found little rest this past week with the men and women playing three matches over four and three days, respectively. The men capped the three-game run with a win after losing the first two, adding to a mixed record on the season. The women secured all three wins, moving to 4-2 for a season defined more by missing matches than playing them.

The men fell just short in their 3-4 loss to Saint Joseph’s in the first of three matches this past week. The team dropped the doubles point to begin and found itself at a 3-1 deficit after the first three singles matches. The Wildcats scraped back to a 3-3 score with the final singles match in progress. Sophomore Daniel Cheng took the first set of his number singles match but could not put the match away in the end.

The story is much the same for the men’s tennis team overall, dealing with youth and doubles inconsistency.

“We have come up short too many times in doubles where we dug ourselves into a very tough hole to get out of against experienced opponents,” Coach Brad Adams said.

Saint Joseph’s squad was composed entirely of seniors and graduate students, a luxury not granted to this rendition of the Wildcats. In a tight match like this one, the youth weighs heavily on the nerves of players up against match-deciding points.

The Wildcats reversed their fortunes in doubles against the University of Pennsylvania in the second of three matches, but an early 1-0 lead later became a 1-6 loss in the end. Freshman Josh Robinson nearly added a second point for the match, but ultimately dropped the final set 10-7.

Throughout these matches, Adams adjusted the doubles lineup in an attempt to discover the best chemistry among his young team. Sophomore Alex Kim played beside freshman Ryan Nguyen for the first time this season against Saint Joseph’s and Penn. Adams has full confidence in Kim at the top of the lineup, but a rocky start in both singles and doubles alongside sophomore Justin Suarez forced the switch. After the new partnership lost their first two matches, Adams paired Kim with senior Daniel Martinez for their final match against NJIT. The two eked out a 7-6 victory in route to a 6-1 win for the team.

Some freshmen players continued to solidify their spots in the lineup during the stretch. Freshman Eitan Khromchenko defeated two of his singles opponents over the three matches, notching a team-high seven singles wins over the season. The doubles team of Robinson and junior Matthew Jones dominated throughout each match, always a bright spot for Adams when reviewing his doubles choices. Villanova men’s tennis has won 18 out of its 40 total doubles matches this season, and Robinson and Jones account for half of those wins. Although Adams may still be searching for the optimal six-player combination for the doubles point, he can count on Robinson and Jones at the number two doubles spot.

The Villanova women’s tennis team returned to action for the first time since March 23 against St. John’s, shaking off any rust in a 5-2 victory. Junior Annalise Klopfer finished the three-game period 5-1 in singles and doubles. However, St. John’s may have been her toughest competition. The Red Storm entered the match undefeated, boasting three-time Big East Player of the Year Jessica Livianu who had never lost a singles match to the ‘Cats. Klopfer and senior Lexi DeNucci helped deliver the doubles point before the former’s match with Livianu. Despite close to a month of canceled matches, Klopfer breezed by Livianu in straight sets as the team rolled to victory.

In their second match, the women dominated Providence in a 7-0 decision that was never in doubt. After sweeping the doubles point, all six Villanova players won their singles match in straight sets. It’s not just the men’s team with exciting young talent as freshman Rose Kenny gathered 12 straight games in her number six singles match, winning by a score of 6-0.

The ‘Cats faced their toughest matchup against the University of Connecticut in the last of the three. After losing the doubles point and two of its first three singles matches, Villanova looked down a 3-1 deficit with three singles matches to play. Junior Emily Strande and DeNucci won their singles matches in straight sets to even the match at 3-3 but awaited the result from senior Claudia Althans at the number two spot. After gliding to a 6-1 first set win, Althans needed a third set to put away her opponent and give Villanova its third win in three matches.

With another three matches played for both the Villanova men’s and women’s tennis, each team has success to build from and make adjustments as each reaches the final stretch of their seasons.