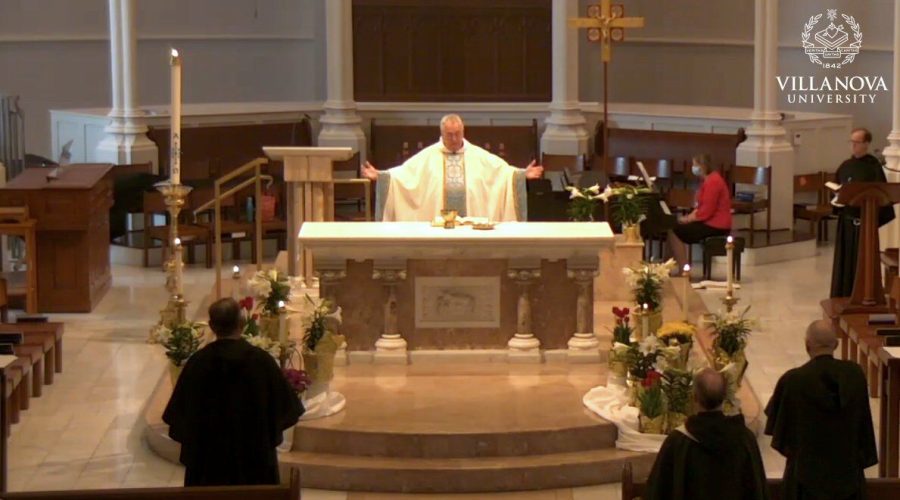 The University and Campus Ministry planned and carried out a celebration for Palm Sunday and Holy Week.

Students on the University’s campus have been anxiously waiting for Easter Sunday to celebrate Christ’s resurrection and finally cave in on all the Lenten promises they had made.

On Mar. 28, Palm Sunday marked the beginning of this year’s Holy Week. The University and its campus ministry team planned and carried out a fitting celebration for this day, as well as for Holy Thursday, Good Friday, Holy Saturday and Easter Sunday.

“The Palm Sunday service was beautiful,” sophomore Jacob Artz said. “I knew campus ministry would have all the altar servers, lectors, Eucharistic ministers and pastorals prepared and ready to offer the Mass as Christ would desire.”

Artz was referring only to Palm Sunday, but his comment remained valid for all services that followed. The Triduum began a few days later, with its first celebration on Holy Thursday, April 1, which University President Rev. Peter M. Donohue, O.S.A., Ph.D. and Rev. Rob Hagan presided over. Though the celebration was similar to most masses during the liturgical calendar’s ordinary time, it prepared the congregation, both physical and virtual, for the sad few days to come.

At 3 p.m. the following day, Donohue and Rev. Kevin DePrinzio celebrated the Mass on Good Friday that paid tribute to the Lord’s Passion. Like the previous two occasions, anyone who wanted to attend could either view a live stream on the University’s website or register for a socially distanced seat in the Finneran Pavilion.

As the masked congregation gathered and took their seats, cameras were turned on to feed the live stream. Donohue, accompanied by DePrinzio, altar servers and lectors, took his spot on the makeshift stage wearing red garments. A seemingly ordinary Mass began with readings and prayers. Everything spoken was translated by an American Sign Language interpreter that was positioned in front of the stage. Though words were spoken quickly, the interpreter impressively kept up with the translation.

Good Friday’s Gospel that tells the Stations of the Cross has been lengthy for years, but thanks to the narrators and Donohue’s theatrical inflection, it remained engaging. The University’s band and choir played somber music during the narration to give it the same effect as the day Christ’s passion occurred. For a brief moment, after the scripture read that Christ had died, silence engulfed the Pavilion, heads were bowed and the lights were dimmed. Donohue broke the silence by reading the last couple of verses that described the burial of Christ. DePrinzio then gave a sermon, encouraging the audience to encounter people outside of their comfort zone and love as Christ loves them.

“When we love like Him, we can accomplish everything,” DePrinzio said.

The homily was followed by the Prayers of the Faithful, in which Donohue offered prayers for elected officials, traveler safety and a “swift end” to the pandemic. Once finished, he made his way off the stage towards the back of the Pavilion from where he entered. There, he was met by students who helped carry a large cross back to the altar. During the candlelit procession, the students made three stops to signify the different situations Christ encountered on the way to His death. During these stops, Donohue chanted,

“Behold, behold the wood of the cross on which is hung our salvation.”

The congregation responded with,

Eventually, the cross was planted in front of the altar. A regular communion then took place, followed by a final blessing, and the celebration was concluded in silence to show respect.

The Easter Vigil was the next celebration and was held on Holy Saturday, April 3. Again, worshipers had the choice to attend in person or watch a live stream. The Mass started outside the Pavilion with the new Easter Candle’s blessing and was eventually brought inside. After the long procession back towards the altar, Donohue, wearing white garments with blue trim, began a series of prayers while surrounded by vibrant flowers and plants. The colors of both are traditionally used to signify a time of joy in the Catholic Church.

Six readings of biblical stories followed the opening prayers. Some included were the Creation Story found in the book of Genesis and the Parting of the Red Sea in the book of Exodus. After the readings, Donohue took his place at the podium and read the day’s gospel, which told the story of Christ’s resurrection according to Mark. He then gave a dramatic homily about the pandemic’s effects on the world, the University and the Catholic faith.

“For a year, we have been in a tomb,” Donohue said, drawing a connection between the gospel and the current crisis.

He finished his sermon encouraging the congregation to take action in escaping the metaphorical tomb by doing our part to get back to the everyday life we once had. Donohue transitioned to the next part of the Mass by introducing the three individuals who have chosen to become Catholic. They were led back to the baptismal font located behind the audience and were baptized and confirmed by Donohue. Once both processes were complete, they were applauded and welcomed into the faith. The Mass continued with regular Prayers of the Faithful and communion. Before ending the two-and-a-half-hour ceremony with a prayer, Donohue thanked the newly baptized and all those who made the celebration possible. A crucifix then led a procession out of the Pavilion with joyful music filling the background noise.

The University continued its celebration on Easter Sunday, April 4, with another Mass on the campus green and reception to wrap up the 2021 Holy Week.