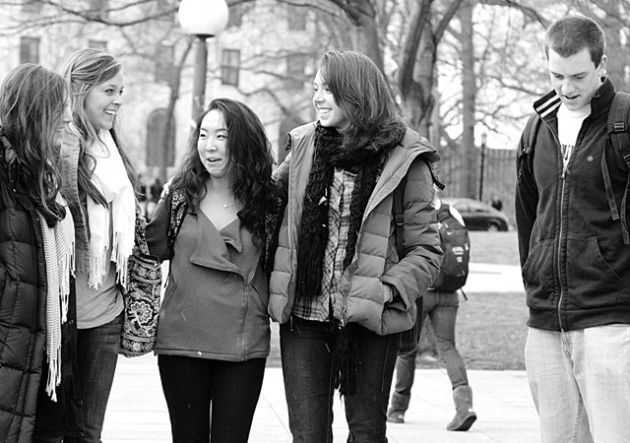 Although there is a larger influx of female applicants nationally, the University tends to have a natural gender balance in its applicant pool – a function of the programs offered, according to Steve Merritt, dean of enrollment management.

However, many college admissions offices find the need to attract more male applicants for the first time in history.

According to a Dec. 16 article in The Chronicle of Higher Education, the U.S. Commission on Civil Rights is currently investigating 19 colleges for evidence of gender discrimination in undergraduate admissions. Included on the list are Gettysburg College, University of Delaware and Johns Hopkins University, among others.

The main concern is that college admissions committees are favoring male applicants as the number of female applicants continues to increase. If colleges are giving admissions preferences to men, they are in violation of Title IX, the federal gender-equity law, according to the article. Public colleges and private coed colleges must comply with Title IX.

Currently, women make up approximately 60 percent of college students and constitute half the workforce.

“Women have been able to gain ground on a variety of indicators, such as test scores, graduation rates for high school and college and earnings in comparison to men,” said Jill McCorkel, sociology professor.

Many colleges strive to admit an even number of qualified men and women but receive far more applications from women.

For example, according to a Dec. 14 article in The Washington Post, the College of William & Mary admitted 43 percent of its male applicants and 29 percent of its female applicants in fall 2008. Differences of this magnitude between men and women in terms of acceptance rates can look like gender discrimination.

However, factors such as programs offered and geographic locations of colleges may help explain admission statistics by gender.

“Women are attending and graduating college at higher rates than men at the aggregate level,” McCorkel said.  “These rates will differ by location at the individual level.”

A majority of the colleges on the U.S. Commission of Civil Rights list are located in the Northeast, where women slightly outnumber men in the general population.

Merritt, as well as other educators, look to three main reasons as to why colleges aspire to admit a freshman class equally composed of men and women.

First, gender is part of the diversity equation, which creates a variety of perspectives in the classroom, along with race, ethnicity, class, geographic location and other personal experiences.

Furthermore, coeducational institutions of higher education want to create a community that serves both men and women.

Likewise, colleges want to create an environment that reflects the real world after college, where men and women must work and communicate with one another in professional settings.

Students who apply to coed colleges desire the chance to socialize with both male and female peers according to their preferences.

Conventional wisdom suggests that a college campus where the gender imbalance is especially pronounced is less appealing to applicants overall.

At a certain point, a preponderance of one gender may make a coed campus seem more like a single-sex campus. According to the University’s Web site, the applicant pool is 51 percent women and 49 percent men. Acceptance rates over the last four years for both men and women have ranged from 39  to 48 percent. In fall 2009, 45 percent of all male applicants were accepted and 48 percent of all female applicants were accepted.

Merritt reports that Villanova enjoys a fairly even gender balance.

“There is no effort on behalf of the Office of University Admission to provide any preference to men over women, or vice versa,” Merritt said. “Villanova tends to have a more natural balance in gender that is a function of the diversity of programs offered rather than the admissions process.”

The wide range of programs offered at Villanova attracted roughly even numbers of male and female applicants for fall 2009. Enrollment by college reveals a much clearer picture of where students apply according to their interests and career aspirations.

“The biggest difference in terms of male and female applicants is that many more women apply for the Colleges of Nursing and Liberal Arts & Sciences,” Merritt said.

Ninety-five percent of current undergraduate nursing students are female, by far the most female-dominated segment of the University.

Merritt explains the admissions process at Villanova is holistic and seeks talented, qualified applicants above all else.

“Besides looking at numerical qualifiers, such as grade point average and SAT scores, the admissions committee also looks at personal qualities and experiences that cannot be quantified,” Merritt said. He also thinks that gender gap by enrollment is less of an issue for larger colleges with more programs, such as Villanova. For now, Merritt states that the University’s admissions process is regularly reviewed and gender equality is not an issue of concern for the University.

The colleges to be studied by the U.S. Commission on Civil Rights will not face penalties or legal action if evidence of gender bias toward male applicants is discovered.

The commission can only “draw public attention to practices in a way that could prompt action in Congress or the courts,” according to The Chronicle of Higher Education.

McCorkel predicts that major changes in policy regarding college admissions are improbable for the time being.

“Until somebody files a lawsuit that claims discrimination or reverse discrimination, it seems unlikely that colleges will change their admissions processes,” McCorkel said.

At this point in history, women outnumber men on college campuses overall, and this trend will continue to be tracked into the next decade.

“The economy also has an influence,” McCorkel said. “I would expect that more boys will apply to college in the future because there are not many well-paying jobs one can obtain without a college education. Competition for jobs will propel men’s achievement.”