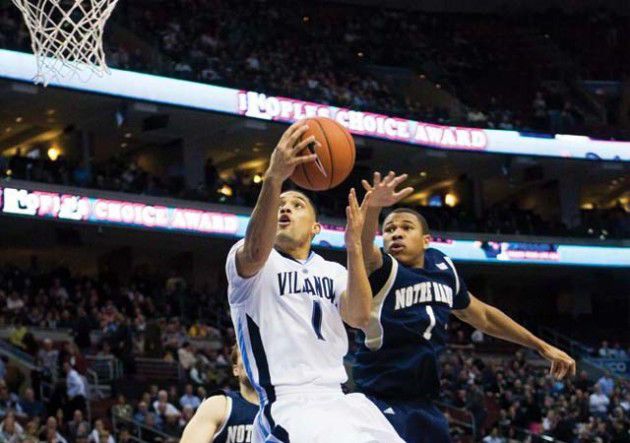 In a game that featured arguably the two most well-known members of the Big East Conference, it was Luke Harangody who won the battle of numbers, but it was Scottie Reynolds’ team that won the hard-fought war.

Another balanced scoring attack which saw four players score in double figures helped the Villanova Wildcats defeat the Notre Dame Fighting Irish last night at the Wachovia Center 90-72, setting a new school record for the best start to a season, 19-1. Corey Fisher and Reynolds paced the ‘Cats with 17 points apiece.

The victory also enabled the Wildcats to hold onto the top spot in the Big East, where they have a spotless 8-0 record, which is also a Villanova first.

The game was closely contested for most of the first half, but after Villanova built a 36-28 lead toward the end of the half, Notre Dame was able to capitalize on some poor Villanova shooting and shaky officiating to cut the deficit to 39-38. Reynolds then showed once again why he is the leader of this team.

After the ‘Cats seemingly deflected a pass into the stands, Reynolds ran out of bounds, grabbed the ball and air-mailed it to half-court where a streaking Maalik Wayns was waiting to convert the pass into a beautiful, contested layup. Villanova had a 41-40 lead at halftime.

The ‘Cats sought to put pressure on Notre Dame’s 3-point shooters by playing a full-court zone press for most of the first half.

While they managed to force only six turnovers, they also held the Irish to only two 3-point baskets. The Wildcats struggled with foul problems in the early going, allowing Notre Dame to get in the free-throw bonus only seven minutes into the first half.  Notre Dame capitalized by making 12 first-half free throws.

After winning his third Big East Rookie of the Week award, Wayns had another impressive performance, scoring eight first half points and dishing out a career high four assists.

But if the story of the first half was the strong play by Wayns, then the second half belonged to redshirt junior forward Antonio Peña. Peña scored the first five points of the half for the Wildcats, and more importantly, limited Irish star forward Harangody to only five second-half points without getting himself into foul trouble.

Peña finished with 14 points, 12 of which came in the second half. He also had 10 rebounds.

“His value gets lost sometimes, but on our team, he is one of those guys who does all the little things,” said Head Coach Jay Wright after the game. “It’s nice when you can get him the ball a little bit.”

Harangody was his usual dominant self, scoring a game-high 21 points and pulling down nine rebounds.

Despite the performances by Wayns and Peña, the Wildcats were unable to pull away from the Irish for most of the second half, until a Taylor King 3-pointer gave the ‘Cats a 66-56 lead with nine minutes remaining.

Reynolds, who was in foul trouble for most of the first half, struggled for most of the game and finished with 17 points on six of 13 shooting. During one two-minute stretch at the end of the second half, Reynolds had nine straight points. That total leaves him at 1,993 career points, only seven shy of becoming Villanova’s eighth 2,000 point scorer.

The win, coupled with Kentucky’s shocking loss to South Carolina last night, leaves Villanova in line to claim the No. 2 spot in the polls when they are released Monday afternoon. Wright took a tone of cautious optimism after the game.

“We see it all, we hear it all and when we get together we address it,” Wright said. “But at the end of the day, we have to concentrate on us. We have control over how we play, and that’s what is meaningful for us. We have a lot of improvements to make; it’s exciting.”

The Wildcats play their next game Tuesday night at 7 p.m. at the Pavilion, where they will take on Seton Hall. After that game, they will embark on the toughest part of their schedule, playing five of their next eight on the road, including games at Georgetown, West Virginia and Syracuse.

“We know that the toughest part of the schedule is coming up, but where we are right now, we’re really happy, and we know we can get better,” Wright said.