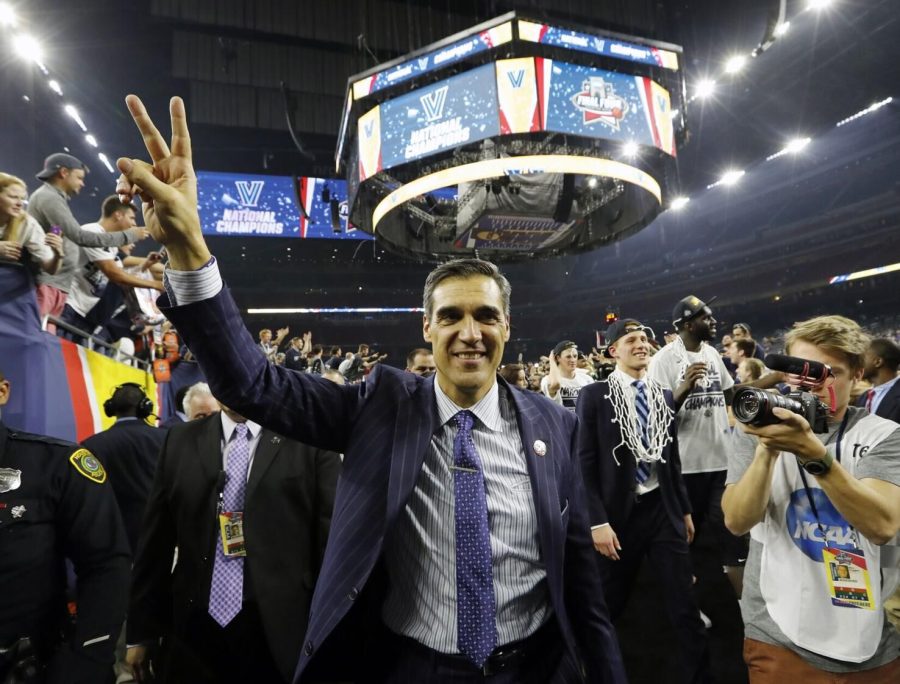 Villanova head coach Jay Wright celebrates after winning the national title in 2016, his first of two championships so far.

In a joint statement with his wife released on Twitter, Wright said “We are humbled and grateful to receive this incredible honor. We are thankful to all those individuals, at Hofstra and Villanova, who have worked with and supported us. At the top of that list are the men and their families who trusted us to coach them. You are always in our hearts.”

“Thinking about it today, all of the texts from all those players, you realize how important each one of them was. It took the total sum of all of those guys to make this happen. Everyone from the walk-ons, managers, our secretary, they’re all very important in this journey,” Wright said in a press conference Sunday night.

In his 27 year coaching career, with seven seasons at Hofstra followed by 20 seasons at Villanova, Wright has 612 career wins, including the 2016 and 2018 national championships. Wright owns a record of 490-189 at Villanova, and has led the Wildcats to eight conference titles and four Big East tournament championships. He has been named Big East Coach of the Year six times, and Naismith National Coach of the Year twice, in 2006 and 2016.

In the NCAA tournament, Wright has a record of 30-15, going to three Final Fours, four Elite Eights, and five Sweet 16s, including the 2021 season.

Although his record on the court speaks for itself, Wright may be best known for the culture he has cultivated at Villanova. An outlier in the one-and-done era, Wright has chosen instead to recruit based upon fit in the team over multiple seasons. This has created a program that is greater than the sum of its parts, and helped build leaders such as Allan Ray, Ryan Arcidiacono, Scottie Reynolds, Jalen Brunson, and most recently Collin Gillespie. This shift in philosophy has been rewarded, as from 2014 to 2018 Wright became the first collegiate coach to win thirty or more games four seasons in a row.

“On behalf of the Villanova community and the entire Nova Nation, congratulations to Jay on this well-deserved honor,” Villanova University President the Rev. Peter M. Donohue, O.S.A., PhD said. “While the numerous championships, wins and awards Jay has amassed over his career are impressive, I am the most proud of the culture he has created and the program he has built here at Villanova. He is a consummate professional and a humble leader who has been a positive influence—on and off the court—to the countless student-athletes he has coached over the years, and I can think of no one more deserving of a place in the Hall of Fame.”

“Jay is both a world class coach and world class person,” added Director of Athletics Mark Jackson. “He and Patty have been incredible friends to so many in our community and are wonderful ambassadors for our University. We couldn’t be more thrilled for both of them and look forward to celebrating this with the Nova Nation later this year.”

The ceremony enshrining Wright and the rest of the Class of 2021 will take place on Saturday, September 11, at the Naismith Memorial Basketball Hall of Fame in Springfield, Massachusetts.