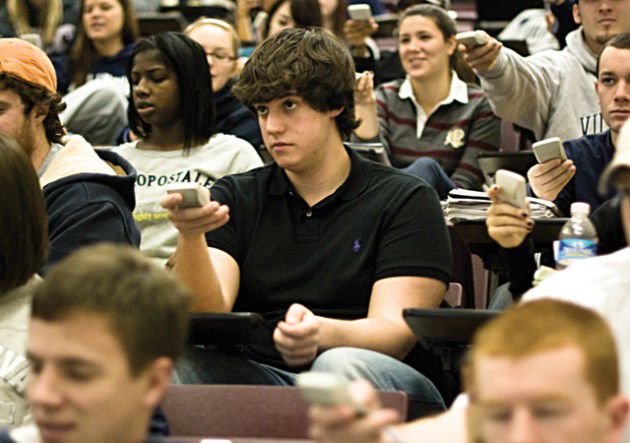 From clickers to Kindles, the University has used technology for over a decade to enhance the learning experience. Administrators continue to incorporate the latest trends as technology has become more omnipresent.

The beginning of portable technology in the classroom came in the mid- to late-’90s as the School of Business began a laptop program, according to Stephen Fugale, chief information officer at UNIT.

About five years ago, the program expanded to all colleges and included the software suite and access to support services. The products each student receives are decided on a college-by-college basis.

According to Fugale, there is no plan to switch over to Apple MacBooks for all colleges, but students receive high-quality laptops that best suit their curriculum.

The University is preparing to embrace future technologies as soon as they are established as useful.

“We would love to see an e-reader program,” he said. “The problem is the technology is new. We don’t want to invest heavily in a technology that might die on the vine in six months.”

Fugale said that with the introduction of the Apple iPad, a tablet computer with an eBook technology, the publishing industry might better organize itself the way the music industry did when the iPod came out. Whereas the music industry made songs accessible through the iTunes Store, the hope is that more publishing companies will make their books available through Apple’s iBookstore.

Right now, a Kindle can be borrowed at Falvey Memorial Library. If a book is not available in the library, a person can request it on the Kindle.

“What we have done with Kindle is set up an account with Amazon,” Falvey Memorial Library Director Joseph Lucia said. “If a student requests it, we will purchase a book for Kindle.”

The Kindle became available in the library in September 2009. The current waitlist for both of the two Kindles is three months, and they have both been in constant circulation, according to Luisa Cywinski, Access Services team leader. Falvey Memorial Library also signed a license for a product called Summon, a new search engine that would allow students to search many sources at once.

“Summon allows us to create a single merged index of all our databases,” Lucia said. “It’s a brand new product that has only been out six months. It is essentially an academic Google.”

Summon will be introduced on the library’s Web site after spring break. Many of the technologies used in the classroom benefit both students and professors.

“WebCT is really a collection of administrative tools,” said Joan Lesovitz, director of Instructional Technologies at UNIT. “If instructors make use of all the tools, it automatically grades exams, posts the grades and sends them out to the students. It streamlines all these processes.”

Wimba is a web-based collaboration program that can also be accessed through Blackboard WebCT. It allows for conference calling and application sharing that is especially useful in distance-learning courses, according to Lesovitz.

Instructors also have the option of using the Respondus device, or “clicker,” in the classroom. According to Lesovitz, it is more than just a device used to take attendance.

“The advantage of clickers is that they can anonymously gauge the students’ understanding,” Lesovitz said. “It can help instructors judge what is being absorbed.”

“If anything, technology hinders cheating,” she said. “Professors can randomize questions. They can also use SafeAssign.”

SafeAssign is a program through which students can submit papers. It automatically searches the Internet to see if any of the paper matches anything online. It gives the percent of the paper that is plagiarized. SafeAssign is also available on WebCT.

ITunes U and YouTube EDU both distribute class lectures. In its first month on YouTube, Villanova University was one of the 20 most visited channels for academic content, according to Lesovitz. Currently, UNIT is working on a Villanova-specific iPhone application that would allow students and instructors to access e-learning information from the phone.

“Villanova’s iPhone app delivers content from our iTunesU and YouTube EDU portals,” Lesovitz said. “The goal of the app is to provide the public, alumni, students, parents, staff and faculty a window to the Villanova University campus.  Future versions will look to build on the current offering with expanded functionality of the campus map, calendaring system, directory search and the learning management system.”

“We want students and instructors to do what they want, when they want, from whatever device they want,” Fugale said.