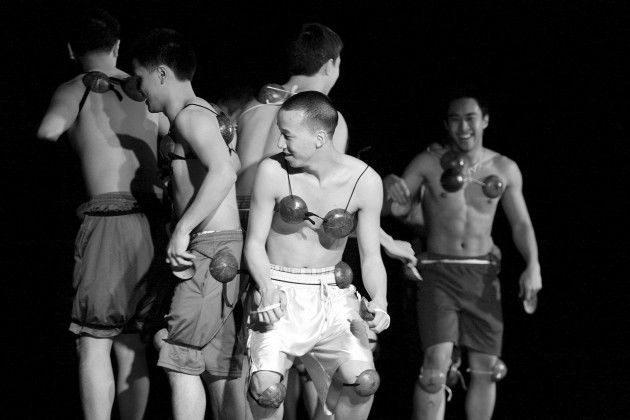 In its most highly anticipated, climactic event of the year, the Asian Students Association lent the Villanova Room, Hollywood and even the Jersey Shore an irresistibly eastern flair.

The show combined music, performances, comedy, food and culture into a spring roll of entertainment.

“I’m so amazed,” said Assistant Vice President for Multicultural Affairs Terry Nance as she admired the decorations in the lobby. “Look at the intricacy of this work.”

This year’s theme was Hollywood. The show incorporated traditions from a range of Asian cultures, in addition to providing other Villanova groups with a chance to showcase their talents, thus broadening the scope of the show’s appeal.

Among the acts celebrating Asian culture were the Maglalatik, a Filipino dance featuring scantily clad male members of ASA; Buchaechum, a beautiful Korean fan dance performed by members of Villanova’s Korean Students Association; “Jasmine Flower,” a popular Chinese folk song sung by members of the Chinese Students and Scholars Association; and Tinikling, the national dance of the Philippines and a crowd favorite.

“Asian Expo is important for the club and the members because it’s a way to truly immerse ourselves in certain aspects of our different cultures that we may not get to experience any other time,” Asian Expo Chair Kimberly Uy said.  “Assimilating into American society sometimes causes us to forget the little traditional things from our home countries.”

Fr3sh Dance Company, an East Coast group that performs all over New York, New Jersey, Pennsylvania, Washington, D.C. and Canada, contributed to the modern, hip-hop vibe that Asian Expo strives to incorporate into its lineup of traditional numbers.

The Asian food sampling during intermission and the fashion show that followed immediately after were two aspects of Asian Expo that most visibly demonstrated the enormity of the effort that went into producing the event.

Intermission at the Asian Expo was an experience unlike that at any other show. A long line wound around the room as people waited to approach the buffet of tempura, sushi, lo mein, fried rice and other elements of Asian cuisine. Performers roamed the room in lavish costumes, enjoying plates of food with friends and family who attended the Expo.

The fashion show seemed to go off without a hitch, perhaps thanks to the two gentlemen dressed as security in suits and sunglasses who stood at the corners of the stage and periodically appeared to speak into small microphones dangling from their ears. In any event, their presence conveyed that “Hollywood” feel of importance as students modeled traditional and contemporary Asian fashions, and Katarina Mayers provided red carpet-esque commentary.

Representing other groups on campus at Asian Expo were the Villanova Sirens with a rendition of “The Impression That I Get” by the Mighty Mighty Bosstones, and the group Andrew Riley of Amendment I with a spoken word performance.

“Every year there’s some chaos behind the scenes, but we always get through it,” Uy said, referring to Saturday’s snow that held up the arrival of one of the off-campus acts.

In addition to the live entertainment, the show featured a series of “commercials,”  created by Lomotan, Laxina and Nathan Villamor, that parodied Guitar Hero commercials, as well as MTV’s recent reality show hit “The Jersey Shore.” Members of ASA dressed up as ” The Jersey Shore” cast and recreated some of the show’s most popular moments.

The three-hour, $9,000 event culminated in a video tribute to the senior members of ASA, a poignant moment for the audience as well as the group.

Fifteen percent of the proceeds will go to Catholic Relief Services, according to Uy.

“The only thing that’s disappointing to me is that more faculty members don’t come,” Nance said.

Indeed, an ACS-approved event has never felt more like a party.