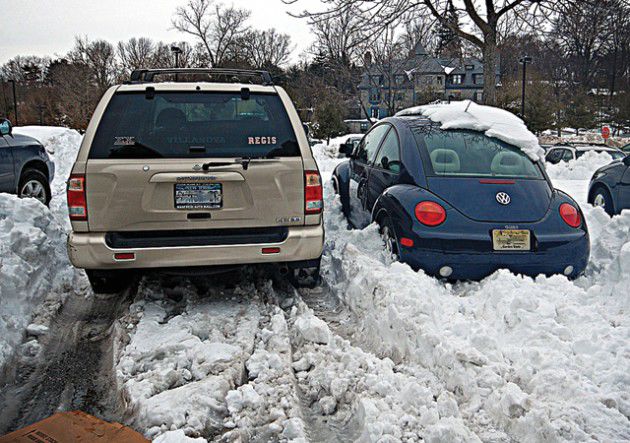 Relentless snowfall tallying over 40 inches in the past two weeks has wrought three consecutive snow days, a new record for snowfall in a single winter season and an aftermath filled with buried cars, icy walkways, mountains of leftover snow and a hefty snow removal bill for the University.

While many students were pleasantly surprised by the first and second snow day – and shocked by the third – the University had used the advanced warning of the storm to prepare for the anticipated closures.

“We had a good sense of how the storm might play out and what the decisions would be,” said Vice President for Administration and Finance Ken Valosky.

Although administrators anticipated at least two consecutive snow days by last Tuesday afternoon, they did not want to prejudge the extent of the storm, according to Vice President for Academic Affairs John Johannes, who officially decides whether to call off classes in close collaboration with Valosky, Executive Director for Facilities Management Robert Morro and, given the immensity of this year’s situation, Rev. Peter Donohue, O.S.A.

“Since I’ve been here, we’ve made two real mistakes,” Johannes said. “We called off classes one time, and it turned out the sun was shining. The other time we did not call off classes, and it snowed a lot.”

As a result of the volatility of weather forecasts, official announcements of the University’s closure were made daily rather than at once, but there is little question that each University closure was warranted this season.

“When the second storm hit, we were still recovering from the weekend storm,” Valosky said.

As the University monitored the second storm late last Tuesday afternoon, its initial focus was on the residence and dining halls, according to Valosky, as it made arrangements to ensure that students, staff and delivery trucks had access to the dining halls and that emergency vehicles had access to the residence halls in the event of a medical emergency.Many students did not even try to venture out of their residence halls and into the snow that blanketed Villanova’s 240-plus acres of campus at a rate of one to two inches per hour last Wednesday.

“I had fun with the powdery snow over the weekend, but I wasn’t leaving my apartment on Wednesday,” junior Lara Alves said. “I could barely see out of our living room window.”

Alves’ reluctance to venture outside last Wednesday is warranted considering that on the same day, everyone from Campus Corner to I-476 shut down its operations. Yet at that same time at Villanova, Public Safety maintained its standard number officers to cover the residence halls and fixed posts during the nightshift, a grounds crew of 30 was present and Dougherty Dining Hall, Donahue Court, Second Storey and the Donahue Market remained open.

“We had people that really pitched in –– we had people stay overnight, come in early or work overtime,” Associate Director of Public Safety Debra Patch said.

With these adjustments, Public Safety was able to have roughly 15 officers cover each of the 11 residence halls and the fixed posts during the nightshift, as well as have roughly seven on duty during the day shift. The University focused on clearing the interior of the campus to ensure that students, staff and delivery trucks had access to the dining halls, according to Valosky.

“I heard some [dining services staff] left their homes at 3 a.m. to make sure we had breakfast,” Valosky said.

The duration of the storm also saw this level of dedication from the grounds crew.

“The crew was pretty tired,” Morro said of the 28-30 men, plus a few supervisors –– many of whom stayed overnight and worked 15-plus hour shifts to get the grounds cleared.

“We had people sleeping at the Radnor Hotel, the Villanova Conference Center, St. Rita’s Hall –– even in the maintenance offices,” Valosky said.

Thursday was dedicated to clearing the grounds, according to Valosky.

“We had from two to six pieces of heavy equipment constantly plowing,” Morro said. “On West Campus it was very difficult because the parking lots are pretty full.”

While the grounds crew toiled, many West Campus residents began to experience white mountains of inconvenience, as they scoured the area for shovels to dig their cars out of the snow.

“Trucks plowed the roadways, but this buried most of our cars in deeper,” junior West Campus resident Cait Hyde said.

“We cleared the travel lanes, but many cars were buried in their spaces,” Morro said. “Once students dug out their cars, we plowed individual spots, but plowing one spot at a time is really difficult and inefficient.”

Some students proposed relocating vehicles to a single location.Looking ahead to future snow tempests, administrators are considering this possibility of restricting parking to an area such as Pike Lot.

“We need to take a more proactive approach with regard to where students park,” Valosky said.

The University considered safety on campus, safety getting to campus and parking when it decided to call off classes for a third consecutive snow day last Friday.

“The issue on Friday was different,” Johannes said.

The roads and many walkways throughout campus were still icily packed by Friday since it was difficult to keep up with the alternating snow and rain, and the more people present on the campus, the harder it would have been to clear the remaining snow and ice, according to Johannes.

“If this hadn’t been a Friday, we would have had a delayed opening,” Valosky said. “Main Lot was cleared by morning, but there were areas that don’t get much sunlight –– such as near the Oreo –– that still presented a hazard.”

Although snow removal remains a priority in the wake of the back-to-back snowstorms, the grounds crew continues to see concerns in this area.

“The issue is that there was nowhere to put the snow,” Valosky said.

To help alleviate this problem, mounds of snow were taken from several locations, including the area behind Falvey, Mendel and in the Tolentine lot, and relocated to West Campus near Dundale Mansion. As classes and normalcy resume, academic issues wrought by the loss of three days of classes have begun to surface.

“We don’t try to catch up,” Johannes said. “We hope faculty and students will accelerate the pace of the materials they cover or otherwise adjust.”

“We’ve pretty much missed a whole week,” said professor Konstantinos Agrios, who teaches organic chemistry. “Missing that much is not insignificant, but I don’t plan on going faster and skimming important topics. Instead, I’ve shifted our schedule one week, so by the end of the semester, I will have covered less than I would have.”

While many professors are faced with the decision either to pick up the pace or make concessions from their syllabi, students also deal with the aftermath of the snow days academically.

“My tests have all been pushed back, so now I have all these consecutive tests on top of midterms coming up, and I might have to make up clinical days,” junior nursing major Lauren Vallone said.

After withstanding two snowfalls in five days, another snow shower on Monday going into Tuesday and more snow forecasted for the weekend, the snow shows no sign of stopping, let alone melting.

“And it’s only February,”  Valosky said.