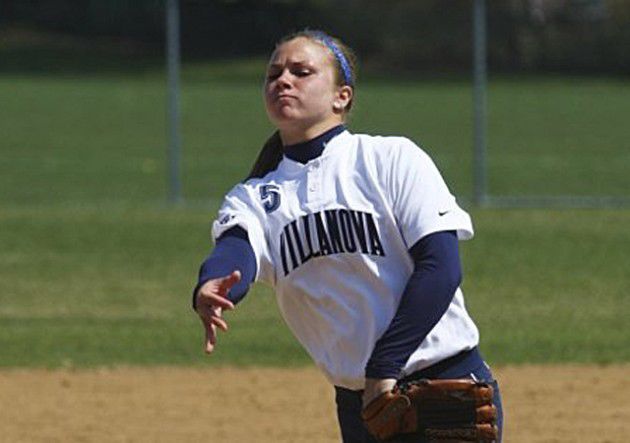 The softball team finished 1-2 in its first Big East series of the season last week against Pittsburgh. The Wildcats fell in the first two matchups at Villanova Field but ended with a victory.

Pittsburgh quickly jumped ahead by one in the top of the first inning and stretched its lead to 3-0 in the third when junior Reba Tutt homered with two outs, and a Villanova error allowed a second Panther to cross the plate.

‘Nova got on the board in the bottom of the third as sophomore Tessa Braga singled, advanced to second on a groundout and came home on an RBI single from freshman Amanda Marquez.

Senior Danielle Maricle’s two RBIs of the day helped the ‘Cats tie it up as she grounded out in the fifth to score sophomore Shannon O’Brien and doubled in the bottom of the seventh to bring in Braga.

The score was locked at 3-3 until the 13th inning, when Pittsburgh put up two more runs. Villanova was quiet in the final stanza and couldn’t get on base to make a comeback.

Saturday’s double-header started off with a second loss for the home team as the Panthers came away with a 6-4 victory.

Delahaba was again productive on the mound, striking out eight batters in 6.2 innings, but the ‘Cats failed to score until the bottom of the seventh, when they were already down 6-0.

Faced with a large deficit late in the game, Villanova went to work as an RBI groundout from freshman Valerie Ortega scored junior Christina Botkins. A Maricle RBI double then brought in sophomore Jamie O’Hara, and a single by Marquez scored O’Brien.

Maricle crossed the plate on a passed ball for ‘Nova’s fourth run, but Pittsburgh held on to win by two.

The second matchup on Saturday and the last game of the series was another close contest, but Villanova was able to avoid a sweep and win 2-1. Maricle, O’Brien and senior Jess O’Boyle all recorded hits.

Sophomore Molly Manning threw a complete game and earned the victory, striking out six batters and holding the Panthers to a single run.

After playing from behind in two games, the Wildcats were never down on Saturday afternoon.

Villanova got its offense going in the bottom of the first as Maricle singled, advanced to second on a passed ball and came home on a Manning single.

Pittsburgh made it 1-1 in the top of the second when sophomore Kristen Cheesebrew doubled, stole third and scored on an RBI single from sophomore Keli Gaynor.

The Wildcats reclaimed the lead in the fourth and never looked back.

Senior Eryn Teague led off with a reach on an error and advanced to second on a fielder’s choice. Junior Stephanie Zrebiec then came in to pinch run.

Zrebiec got to third on a sacrifice bunt from O’Brien and crossed the plate when Maricle fouled out to left field.

The Panthers could only connect for one more hit and failed to get a second run as the Wildcats endured to capture their first conference win.