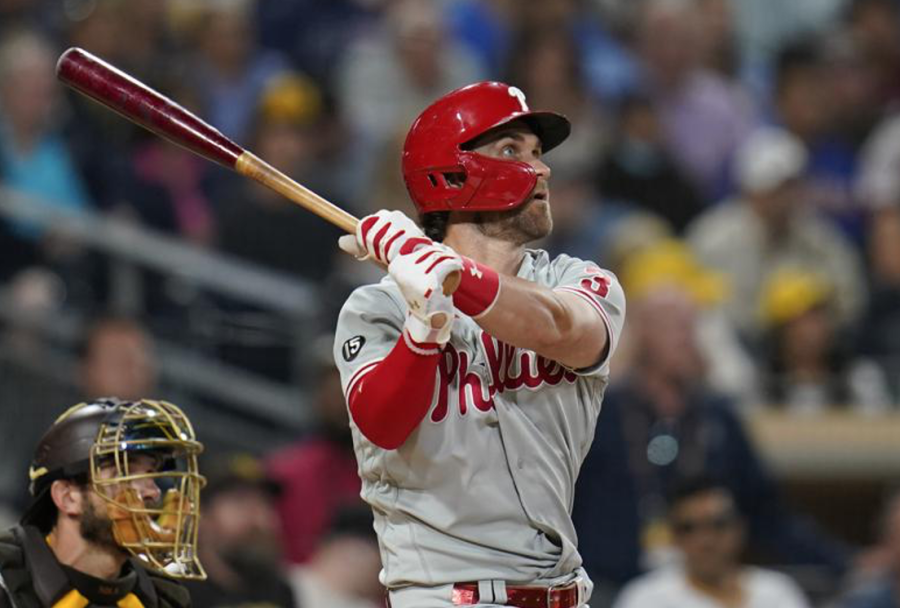 With the help of Bryce Harper’s two run home run Friday night, the Phillies notched a 4-3 win over the San Diego Padres at Petco Park.

The Phillies ace of the rotation Zach Wheeler summed up the Phillies woeful struggles best when he said, “This is a team that you don’t want to be swept by.”  If the Phillies are going to win the National League East and secure themselves a playoff spot, they need to start playing better baseball.  This goes for all facets of the team, especially the hitting and offense in general, as they have struggled mightily in this category over this recent rough stretch.

I reasoned that playing an absolutely horrible Arizona Diamondbacks team this week would have created the right ingredients for an offensive explosion and a seat on the winning train once again.  I was dead wrong as the Phillies hit a drought in the Arizona desert and were finished off in a shocking sweep on Thursday as they succumbed to the lowly Diamondbacks 6-2.  This sweep is especially surprising considering the Phillies have only two other instances in franchise history where they have been swept in a series of three games or more against a team with a winning percentage of .320 or lower.  The other two times occurred in August 1923 when they were swept by the Boston Braves and in September 1969 against the Montreal Expos.  The Diamondbacks entered the series with a .319 winning percentage and a record of 38-81, according to NBC Sports Philadelphia.

August and September baseball has a way of separating the pretenders from the contenders, and the Phillies are in danger of again becoming a pretender late in the season while fading into another long offseason unless they turn it around.  After leading the division on August 10th by two games over the Atlanta Braves after their momentous sweep of the first-place New York Mets, the Phillies have, as of August 21st, slipped to four games back of the red-hot Atlanta Braves, who have won 14 of their 17 games in August including their last seven all on the road according to ESPN.

The offense is mostly to blame in this recent losing stretch.  After an eight-game winning streak, the Phillies have lost seven of their last nine.  They have dipped to a woeful .181 average as a team and only 2.3 runs per game in this stretch, according to NBC Sports Philadelphia.  The contrast in the performance of the offense is especially apparent in star catcher JT Realmuto as he exploded for a .414 average with two home runs and 10 RBIs during the eight-game winning streak, but in this losing stretch, Realmuto has only three hits in his last 26 plate appearances and 0 hits in his last 11 plate appearances against Arizona according to NBC Sports Philadelphia.  Realmuto expanded on the struggles on the team as a whole when he said, “I feel like right now as a group we’re trying to do too much up there and putting ourselves in holes and not getting the job done, and when that happens, it has a domino effect and spreads to your teammates.”

The domino effect may have begun on Friday night against a very good San Diego Padres team with the aforementioned JT Realmuto as he opened the scoring in the top of the third inning with an RBI double off of the left-field wall to score Jean Segura from second.  In one of the best plate appearances we have seen this year from a Phillie, Bryce Harper got out of a 0-2 hole and worked a full count.  Once he did this, he, as Phillies commentator Tom McCarthy said, “golfed” the baseball out to the right field and into the walkway at Petco Park to give the Phillies a 3-0 lead early.  This was Bryce Harper’s 23rd home run of the year, according to NBC Sports Philadelphia.  Padres star Manny Machado wasted no time getting San Diego back in the mix with a rocket two-run home run in the third to cut the Phillies lead to 3-2.

We had to wait all the way until the eighth inning before we had another scoring as Andrew McCutchen hit a huge RBI double to again score Segura to give the Phillies a two-run advantage.  As all Phillies fans know, the bullpen likes making the end of the game interesting as Ian Kennedy hit Padres superstar Fernando Tatis Jr. in the helmet with a pitch forcing in a run as the bases were loaded.  Kennedy then struck out Machado to end the bases-loaded threat and eventually pick up the four-out save.

This big win will hopefully be a boost for the Phillies as they are four games back in the National League Wild Card and National League East standings.  They are going to need another surge before the all-important September baseball rolls around to increase their playoff chances.