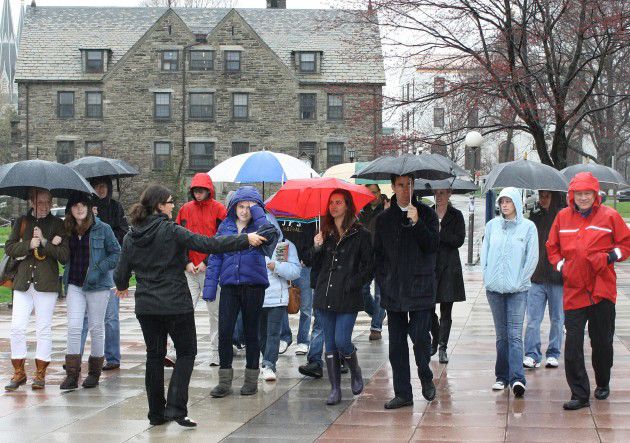 From this year’s total applicant pool, 5,998 students were offered admission for an admissions rate of 41.1 percent, down 5.3 percent from last year, according to Dean of Enrollment Management Stephen Merritt.

Of this year’s accepted students, 47 percent are male, and 53 percent are female. The University hopes its acceptances will result in a class of 1,630 students, a number that will be a target for at least the next two years.

“The University isn’t interested in growing any larger,” Merritt said.

The College of Liberal Arts & Sciences received a total of 4,747 applications in Arts and 3,362 in Sciences.

The Sciences, College of Engineering and School of Nursing received record numbers of applications, Merritt said.

He credits this to the quality of the programs, the state of the economy and the fact that high school students tend to believe these fields lead directly to employment. The undergraduate admissions office saw the largest number of applicants from diverse backgrounds in the history of the University. Applications were received from 1,462 Asian-Americans, 1,005 Hispanic-Americans, 661 African-Americans and 63 Native Americans, totaling 22 percent of the applicant pool.

“Our goal is to have about 20 percent of the incoming class be from diverse backgrounds,” Merritt said.

The University received applications from every state except North Dakota, as well as Washington D.C., Puerto Rico, the Virgin Islands and 85 international locations.

“It’s a Who’s Who from all over the world,” Merritt said. “We received 30 applications from South Korea alone.”

When considering students for admission, the major factors for consideration are past academic performance as measured by strength of high school course work and GPA, SAT and ACT scores, leadership and activities and strength of the application essay, according to Merritt.

One reason for the continued use of SAT and ACT scores is that they allow admission officials to compare students in the Villanova applicant pool who attend over 3,000 different high schools.

“It gives us a reasonable leveling point,” Merritt said. “As well, we’ve done our research, and they are a fairly good indicator, along with GPA, of first semester performance at Villanova.”

“We use the SAT writing sample as what we call ‘supplemental information,'” Merritt said. “It is not used for final review.”

Though SAT scores remained about the same, the middle 50 percent range of the applicant’s high school GPA did rise to 3.72-4.11, based on a 4.0 scale.

A student’s background is also an important factor.

“We try to create an interesting freshman class, with people from all walks of life,” Merritt said.